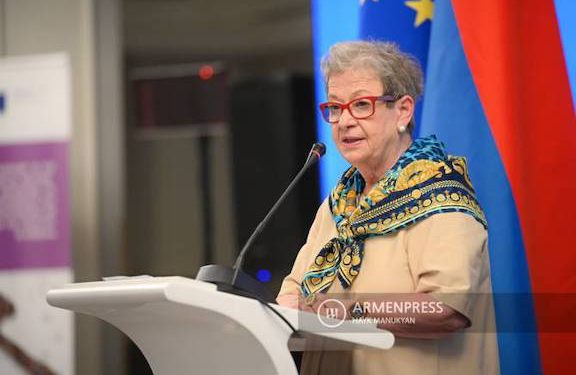 The European Union’s Ambassador to Armenia, Andrea Wiktorin, on Wednesday decried instances of hate speech and what she called “brute use of force by police” when discussing the internal political situation in Armenia, which has been gripped by clashes between the government forces and oppositions, which has been staging protests calling for the ouster of Prime Minister Nikol Pashinyan.

Wiktorin and the EU Representation in Armenia were called out on Tuesday by opposition forces who accused the EU of using double standards when advocating for rule of law in Armenia. They claimed that during the 2018 protests that saw Pashinyan come to power, the EU was much more vocal about brutal use of force by law enforcement. A protest in front of the EU representation on Tuesday ended in more violence by police. Opposition leaders accused Wiktorin of instigating the “use of force” by remaining silent.

For more than five week opposition activists have staged marches and protests across Yerevan and other cities in Armenia. During this time hundreds of protesters have been detained and brute force has been used by police and other law enforcement, with events escalating late last week when dozens of protesters were injured.

The use of force by law enforcement has been criticized by Armenia’s Human Rights Defender Kristine Grigoryan, as well as the United States Ambassador to Armenia, Lynne Tracy.

Speaking at a conference about judicial reforms and rule of law in Yerevan on Wednesday, Wikorin said that it is very important that all sides in Armenia refrain from hate speech and provocations. Any violence must be condemned, she added. “In such situations, I think, promoting trust towards our Constitutional Court and the judiciary is more than important,” she said.

Ironically, opposition lawmakers were barred from attending the conference

“Armenia is facing numerous challenges, and we are very impressed that the authorities willingly continue moving on the path of reforms. There is currently big tension in the country, and it’s very important that all sides work together to protect the constitutional rights of the citizens of Armenia. We closely follow the domestic political situation and the protests in the country,” said Wiktorin.

“It’s very important for the people to be able to voice their opinion freely, and the law enforcement agencies and police forces should refrain from using brute force. Some incidents that have taken place should be investigated, it already happens in some of the cases, the cases reach to the court and a ruling is being made. That’s how democracy works,” the EU envoy added.

She pledged the EU’s continues support to Armenia in reforming its justice system and pointed out the long-term and short-term support provided by the EU for this effort.

“We have always supported the implementation of justice reforms, and for this purpose we have provided long-term and short-term support. We highly value the efforts Armenia has made in recent years in terms of democratic processes. It’s also very important that the political leadership is committed to continue the constitutional reforms that are envisaged by the 2019-2021 judicial reforms strategy,” the EU Ambassador said.

She explained that an independent judiciary in a democratic country is the guarantor of human rights and freedoms, therefore, she said, the Constitutional Court has an important role to play to strengthen the public trust toward judiciary.