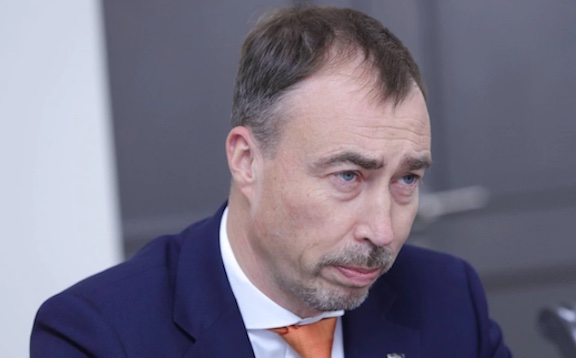 Toivo Klaar, the EU’s special representative to the South Caucasus

YEREVAN (Azatutyun.am)—A senior European Union diplomat urged Armenia and Azerbaijan to show “strong political will” to end their long-running conflict on Monday following the effective cancellation of an Armenian-Azerbaijani summit planned in Brussels.

Azerbaijani President Ilham Aliyev said on Friday that the summit slated for December 7 will not take place because Armenian Prime Minister Nikol Pashinyan wants French President Emmanuel Macron to also take part in it. He said that France can no longer mediate Armenian-Azerbaijani negotiations because of Macron’s recent pro-Armenian comments and “anti-Azerbaijani” resolutions adopted by French lawmakers.

France did not publicly respond to Aliyev’s accusations. The French Foreign Ministry said only that Paris “remains fully committed to supporting current negotiations” between Baku and Yerevan.”

Toivo Klaar, the EU’s special representative in the South Caucasus, met with Aliyev in Baku late last week. He said that the Azerbaijani leader remains committed to the “EU-facilitated format” of peace talks.

“Many challenges remain; restraint and strong political will be needed by Azerbaijan and Armenia to reduce tensions to achieve a comprehensive settlement,” tweeted Klaar.

It remained unclear whether Charles Michel, the head of the EU’s top decision-making body, still hopes to host next week talks between Aliyev and Pashinyan with or without Macron’s participation.

The four men met in Prague on October 6. The Armenian Foreign Ministry insisted on Friday on the same format of the next Armenian-Azerbaijani summit in Brussels and “the composition of its participants.”

The December 7 meeting was called off amid mounting tensions on the Armenian-Azerbaijani border and the “line of contact” in and around Karabakh. Armenia and Azerbaijan continued to accuse each other at the weekend of violating the ceasefire at various section of the border.

CSTO Claims it Offered Support to Armenia, Including Deployment of Border Mission