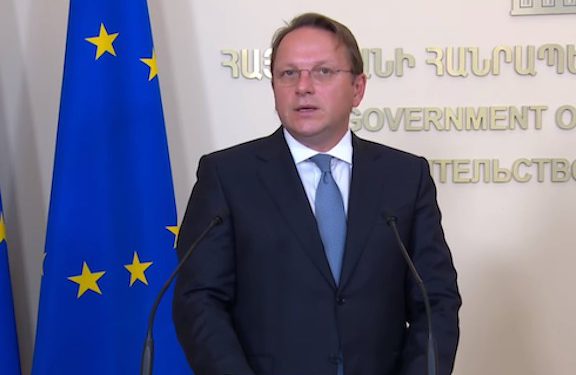 YEREVAN (Azatutuyun.am)—The European Union pledged on Friday to provide Armenia with up to 2.6 billion euros ($3.1 billion) in economic assistance and investments over the next five years.

EU Commissioner for Neighborhood and Enlargement Oliver Varhelyi discussed with Armenian leaders the planned sharp increase in EU aid while visiting Yerevan on the final leg of his tour of the three South Caucasus states.

The sum cited by Varhelyi is part of an “economic and investment plan” drafted by the European Commission for six ex-Soviet republics involved in the EU’s Eastern Partnership program. The EU’s executive body said last week that it has asked the bloc’s 27 member states to approve the plan, potentially worth 17 billion euros in “public and private investments,” at an Eastern Partnership summit slated for December.

The commission is specifically seeking 1.6 billion euros ($1.9 billion) in EU grants, loans and loan guarantees for five “flagship initiatives” drawn up by it for Armenia. That includes up to 500 million euros in funding for some 30,000 small and medium-sized enterprises and 600 million euros worth of capital investments in the country’s transport infrastructure.

Varhelyi announced that the EU will also raise “together with our international partners” an additional 1 billion euros for Armenia. He did not specify what the extra funding will be spent on.

“We will allocate 1.6 billion euros for these flagship initiatives, and altogether we are able to mobilize 2.6 billion euros under this plan,” he told a joint news conference with Grigoryan.
The EU official said the large-scale aid and investments will significantly speed up economic growth in the country.

Pashinyan hailed the promised aid package, telling Varhelyi that he regards it as a “reaction to irreversible democratic processes taking place in Armenia.” He singled out the June 20 parliamentary elections described by European observers as “competitive and generally well-managed.”

Varhelyi also praised the Armenian authorities’ handling of the snap elections which were called to end a serious political crisis resulting from last year’s war in Nagorno-Karabakh.

Pashinyan and Varhelyi also discussed the aftermath of the six-week war stopped by a Russian-brokered ceasefire in November.

“I want to confirm that the EU is ready and committed to take on a very active role on in the post-hostilities situation both as a facilitator of confidence-building measures … and later on as a key partner in the economic recovery,” Varhelyi told journalists.