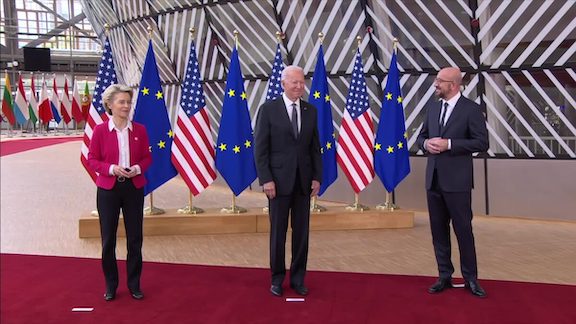 The European Union and the United States are promoting confidence building measures between Armenia and Azerbaijan, Council of Europe President Charles Michel said after a EU-US Summit in Brussels.

“The EU a US make a difference for peace. We work together to resolve regional conflicts, bringing political parties back to Parliament in Georgia, promoting confidence building measures in Armenia and Azerbaijan,” Michel said in a Twitter post.

In a statement issued after the summit the parties said they are committed to working toward peace and stability in the Caucasus.

“We resolve to work towards long-term peace, resilience, and stability in the South Caucasus,” the US and EU said upon the conclusion of the summit in Brussels.

The leaders of the European Union and the United States, met in Brussels on Tuesday to renew their Transatlantic partnership, set a Joint Transatlantic Agenda for the post-pandemic era, and commit to regular dialogue to take stock of progress.

“We are determined to continue to stand in support of the sovereignty, independence, and territorial integrity of the EU’s Eastern partners and will support the reform path of Ukraine, Georgia, and the Republic of Moldova,” the leaders said in a statement.