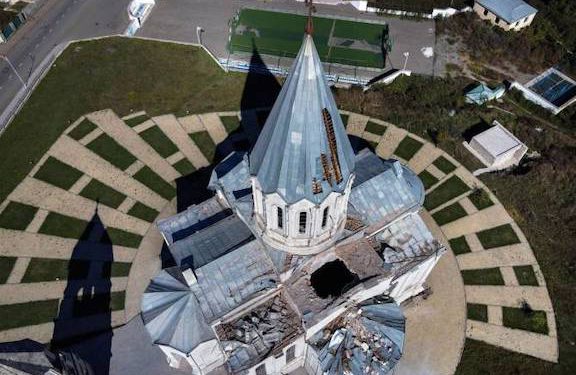 Prominent European groups the Europa Nostra and the European Association of Archaeologists have issued a joint statement regarding the need to for the protection of the integrity, authenticity, and diversity of the rich multicultural heritage in and around the area of Nagorno Karabakh.

Below is the complete text of the statement.

“We, representatives of EUROPA NOSTRA and the European Association of Archaeologists – two large European non-governmental organizations committed to the promotion and protection of cultural heritage that are also active members of the European Heritage Alliance and that collaborate closely with the European Union, the Council of Europe and UNESCO – wish to reiterate our joint commitment to the holistic preservation of the integrity, authenticity and diversity of the rich cultural heritage which is located in the Caucasus region and which is the expression of a multicultural and multireligious past and present of this region and of Europe as a whole.

We therefore deplore and condemn any act of damage, destruction or distortion of cultural heritage sites, which has happened as a consequence of a conflict or of the lack of respect for any of the cultures that have flourished in the Caucasus region, and in particular in and around the area internationally known as Nagorno-Karabakh. Referring to many international and European documents, we wish to recall that such acts are clearly not acceptable and unlawful.

We firmly believe in the essential value of cultural heritage as a vital resource and responsibility for present generations to pass on to future ones. We recognize and celebrate the cultural diversities as they are represented in our shared heritage; these can help in building bridges of mutual respect and understanding above ethnic or religious divides, as a critical element of building lasting peace. We are thus convinced that any destruction of heritage, or any distortion and/or misconstruction of (art) history has the opposite effect, often setting the ground for renewed cycles of mistrust, conflict and even violence.

As European heritage networks that collaborate closely and fruitfully with the European Union we therefore applaud and endorse the Conclusions recently adopted by the Council of the European Union welcoming the EU Concept on cultural heritage in conflicts and crises, which enhances the EU’s approach to promoting peace, security, democracy and sustainable development.

More specifically, we welcome the Resolution RC-B9-0277/2021 adopted by the European Parliament on 21 May 2021 in response to the latest conflict in the region. We especially endorse its article 16 which states that the European Parliament “Strongly insists that both parties refrain from any actions destroying Armenian heritage in Azerbaijan and Azeri heritage in Armenia; calls for the full restoration of demolished sites and for greater involvement of the international community in protecting world heritage in the region” as well as its article 21 which states that the European Parliament “Calls on the European Commission and the Member States to continue supporting the provision of urgent humanitarian assistance and the work of international organizations in this area and on the protection of cultural and religious heritage, as well as to support civil society organizations in Armenia and Azerbaijan that genuinely contribute to reconciliation”.

In the light of the above,

As a matter of urgent priority, due to alarming allegations by various parties of deliberate damage, destruction and/or distortion of cultural heritage which has happened in and around the area of Nagorno-Karabakh, we call for an impartial European/international team of experts to access the region in order to conduct a comprehensive and objective scientific survey of the rich and diverse cultural heritage in this area, with a related assessment of its state of conservation. We are convinced that this will be in the best interest of both Azerbaijan and Armenia, their people and their culture, as well as of the rest of Europe and Humanity.

More generally, we urge Azerbaijan and Armenia to collaborate and live up to their commitments, responsibilities and international obligations on the basis of the Trilateral Statement ending the recent hostilities which they co-signed with the Russian Federation on 9 November 2020 as well as on the basis of key international and European documents related to cultural heritage signed by these two countries.

We also urge UNESCO, the Council of Europe, and the OSCE-Minsk group to join forces in encouraging and assisting positive efforts towards the holistic safeguard of the endangered multicultural and multireligious heritage in the affected area.

As far as the European Union is concerned, we invite EU Institutions and Member States to apply to the area of Nagorno-Karabakh the principles of the above-mentioned EU Council Conclusions and adopt concrete positive measures in line with the related EU Concept Paper on Cultural Heritage in Conflicts and Crises.

Last but not least, we offer our extensive heritage expertise and experience to contribute to the due protection of the integrity, authenticity and diversity of the rich cultural heritage in and around the area of Nagorno-Karabakh, as in other regions of the Caucasus. We are willing to work with all stakeholders concerned to help use cultural heritage (tangible and intangible) as a bridge between various communities and as a vector for (re)building respect, confidence and dialogue as prerequisites for a lasting peace and prosperity in the wider region”.

Europa Nostra is the European voice of civil society committed to safeguarding and promoting cultural and natural heritage. A pan-European federation of heritage NGOs, supported by a wide network of public bodies, private companies and individuals, it covers more than 40 countries. Founded in 1963, it is today recognised as the largest and the most representative heritage network in Europe. Europa Nostra campaigns to save Europe’s endangered monuments, sites and landscapes, in particular through the 7 Most Endangered program. It celebrates excellence through the European Heritage Awards / Europa Nostra Awards. Europa Nostra actively contributes to the definition and implementation of European strategies and policies related to heritage, through a participatory dialogue with European Institutions and the coordination of the European Heritage Alliance 3.3. Europa Nostra was one of the instigators and an important civil society partner of the European Year of Cultural Heritage 2018.

The European Association of Archaeologists (EAA) is a non-profit non-governmental organisation associating archaeologists and interested public from Europe and beyond. The aim of the Association is to promote the development of archaeological research and the exchange of archaeological information in Europe, to promote the management and interpretation of the European archaeological heritage, and to promote proper ethical, scientific and formal standards for archaeological work. In order to reach these goals, the EAA organises Annual Meetings, publishes a journal, two monograph series and a newsletter, creates trans-national Communities, Committees and Task Forces to establish widely agreed policies and solutions to current challenges that the archaeological profession faces in research and heritage management, it acts as an advisory body on all issues relating to the archaeology of Europe, and participates in the professional events and activities throughout Europe.

The EAA was founded in 1994 at the Inaugural Meeting held in Ljubljana, Slovenia. More than fifteen thousand archaeologists from more than 70 countries have been members; the yearly current membership amounts to over two thousand five hundred individuals. The dissemination impact of the EAA through its conferences, publications and web-based communication ensures widespread circulation of the relevant information.

Putin and Pashinyan Meet in Moscow