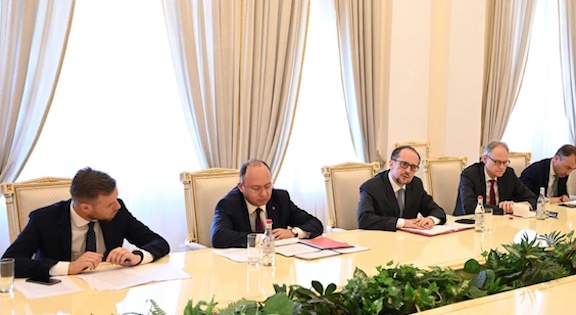 The foreign ministers of Austria, Lithuania and Romania meet with President Armen Sarkissian in Yerevan on June 25

YEREVAN (Azatutyun.am)—The foreign ministers of Austria, Lithuania and Romania met with Azerbaijan’s and Armenia’s leaders on Friday during a joint tour of the three South Caucasus states aimed at exploring the European Union’s stronger presence in the region.

The ministers arrived in Yerevan after holding talks with Azerbaijani President Ilham Aliyev and Foreign Minister Jeyhun Bayramov in Baku. They were due to proceed to Georgia later in the day.

The EU said earlier this week that the visit “mandated” by its foreign and security policy chief, Josep Borrell, “will highlight the importance that the European Union attaches to its bilateral relations with these countries.”

“The visit signals the EU’s readiness to support broader cooperation both with and between the South Caucasus countries, including through the opportunities available under the Eastern Partnership,” it said in a statement announcing the trip.

The top diplomats of the three EU member states will also “underscore the EU’s determination to promote and actively support sustainable and comprehensive conflict settlement efforts,” added the statement.

“We have seen how quickly seemingly frozen conflicts can erupt again,” he said in a clear reference to last year’s war in Nagorno-Karabakh. “The EU is determined to promote a durable and comprehensive settlement of the conflict, in close cooperation with all our partners, including the OSCE.”

In that regard, Schallenberg welcomed the recent release of 15 Armenian soldiers who were taken prisoner during the war. Baku freed them after receiving more information from Armenia about minefields around Nagorno-Karabakh.

Schallenberg praised the Armenian authorities for “successfully conducting parliamentary elections” described by European observers as largely democratic. “I think this is an opportunity to move forward,” he said.

Commenting on the EU’s relations with Armenia, the Austrian minister pointed to their Comprehensive and Enhanced Partnership Agreement (CEPA) which entered into force in March.

The 350-page agreement commits the Armenian authorities to carrying out political reforms that will democratize the country’s political system and boost human rights protection. They must also gradually “approximate” Armenian economic laws and regulations to those of the EU.

“It will take some time to adopt all necessary legislative measures and even more to fully implement them,” said Schallenberg. “But the first step has been taken.”

Schallenberg also described Austria’s bilateral relations with Armenia as “excellent.” “We are gradually strengthening our presence in the country,” he said.

Macron Calls for Karabakh Settlement with 'Respect for Armenia's Sovereignty'