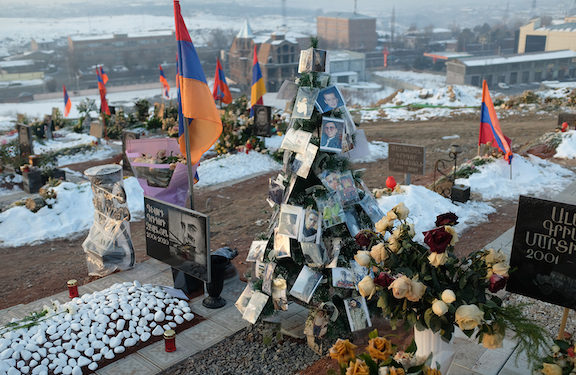 Pashinyan announced on Wednesday that such festivities will be held in Yerevan’s central Republic Square on September 21 to mark the 30th anniversary of the country’s declaration of independence from the disintegrating Soviet Union.

“That will be first and foremost dedicated to our martyrs who sacrificed their lives for Armenia’s independence, security and sovereignty,” he said during a cabinet meeting.

The announcement appears to have angered many relatives of the Armenian victims of the six-week war in Nagorno-Karabakh that broke out almost one year ago.

Some of them took to social media to condemn it and even threaten to disrupt the planned event. They said that any pompous celebrations would be highly inappropriate in a country which is still mourning the war dead and has not yet found, identified and buried all of its fallen soldiers.

According to official figures, about 3,800 Armenian soldiers were killed and more than 200 others went missing or were taken prisoner during the hostilities stopped by a Russian-brokered ceasefire last November. Karabakh Armenian search teams still recover, on a virtually daily basis, soldiers’ remains from former battlefields now controlled by Azerbaijani forces.
Some opposition politicians and public figures added their voice to the uproar, demanding that the government scale down the Independence Day events.

Most people randomly interviewed by RFE/RL’s Armenian Service in the streets of Yerevan also favored a muted celebration of the key national holiday.

“The independence holiday must be marked but not ‘colorfully,’” said one man. “What does marking it ‘colorfully’ in memory of the dead mean? What is it?”

“It should be marked but not in the way presented [by Pashinyan,]” said a woman.

“I think that in these circumstances we have no right to celebrate any holiday,” opined another Yerevan resident.

The government has not yet reacted to the criticism. It has already contracted a private company to stage the festivities at Republic Square.

The company’s founder, Ashot Arakelyan, gave few details of the planned event when he spoke with RFE/RL’s Armenian Service on Thursday. He said only that it will feature classical music.