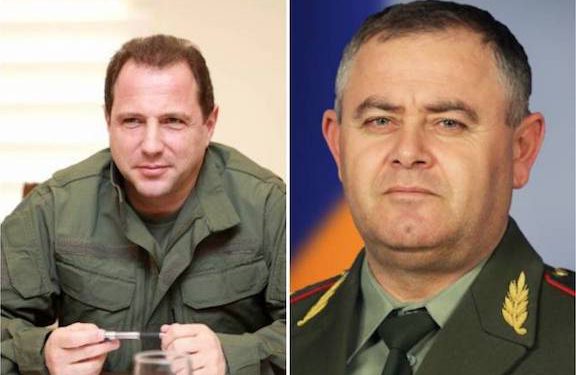 Indictments were issued on Jan. 10 against former defense minister Davit Tonoyan (left) and former Army chief of staff Lieutenant-General Artak Davtyan among others

YEREVAN (Azatutyun.am)—State prosecutors revealed on Monday that Armenia’s top army general has also been charged in a criminal investigation into supplies of allegedly faulty ammunition to the armed forces.

Two other generals as well as former Defense Minister Davit Tonoyan and an arms dealer were arrested as part of the same investigation in September. The National Security Service charged them with fraud and embezzlement that cost the state almost 2.3 billion drams ($4.7 million).

The accusations stem from the purchase of allegedly outdated rockets for the Armenian army.

According to the NSS, a private intermediary delivered the rockets to Armenia in 2011 and that the Defense Ministry refused to buy them at the time after discovering that they are unusable. The ministry re-commissioned them after Tonoyan was appointed as defense minister in 2018.

The NSS for months did not confirm reports that it has also indicted Lieutenant-General Artak Davtyan, the chief the army’s General Staff.

A spokesman for the Office of the Prosecutor-General, Gor Abrahamyan, listed Davtyan among seven indicted suspects in the case. Abrahamyan said he stands accused of abuse of power but did not elaborate.

The suspects include Lieutenant-General Stepan Galstyan, one of Davtyan’s former deputies who was fired in December.

Davtyan has not been dismissed despite the indictment. It is not clear whether he will plead guilty to the accusations during his trial expected to start soon.

According to Abrahamyan, a prosecutor overseeing the NSS inquiry certified its findings and sent the case to a court on January 7.

The prosecutor’s decision came four days after Tonoyan again strongly denied any wrongdoing. In a statement, the former defense minister insisted that the ammunition did not go past its expiration and was successfully used during the 2020 war in Nagorno-Karabakh.

Tonoyan warned that he must not be made a scapegoat for Armenia’s defeat in the six-week war. He pledged to make “surprise” revelations in that regard.