France Decries Use of Force During Yerevan-Baku Negotiations 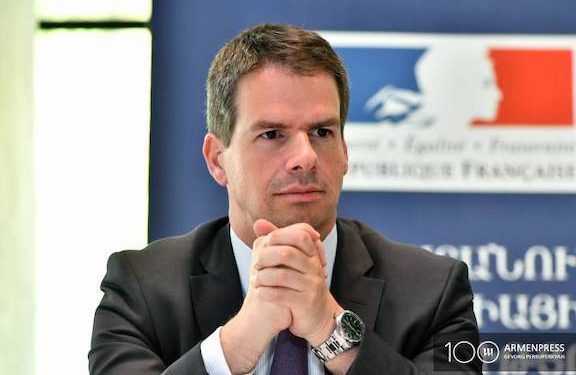 “At this very moment, when we are holding this event, armed operations are taking place in the territory of Armenia, in the Gegharkunik province,” France’s Ambassador to Armenia Jonathan Lacote

France called on Armenia and Azerbaijan to resume political talks which must be fair and should not take place under threat of force.

“At this very moment, when we are holding this event, armed operations are taking place in the territory of Armenia, in the Gegharkunik province,” France’s Ambassador to Armenia Jonathan Lacote said during a press conference dedicated to the completion of archaeological excavations in Erebuni.

“We also understand that this is taking place in the context when there is an escalation of the situation on the Armenian-Azerbaijani border,” added Lacote who added that France is concerned about the development “because it is also a violation of the ceasefire, because of that the security situation on Armenia’s borders in getting worse.”

Lacote stressed that the escalation of the border situation is especially worrisome for France saying there are “problems” with the implementation of the November 9 agreement, “specifically the point relating to the release of all prisoners of war held in Azerbaijan.”

France will consider appeals by Armenia about support in the field of defense, however, one should take into account that Armenia and France are not members of the same military alliance Lacote said during the press conference.

“In general, our goal is not to prepare for any future war, but to avoid war because I think that the problems existing in the region must not be solved by force, the Karabakh issue, the Armenian-Azerbaijani border issue must be solved only through negotiations. Any alternative will lead to a deadlock,” added the French ambassador.