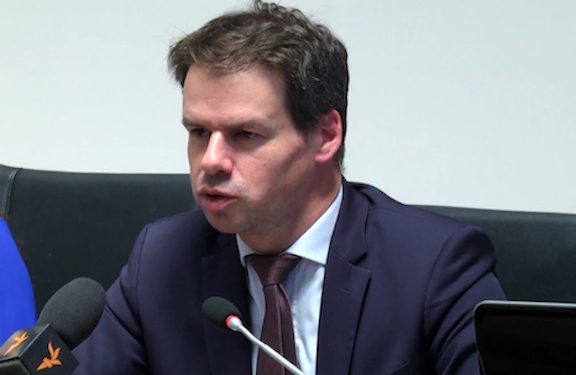 YEREVAN (Azatutyun.am)—France has joined international efforts to secure the release of Armenian soldiers and civilians remaining in Azerbaijani captivity, the French ambassador to Armenia, Jonathan Lacote, said on Friday.

“There is an intensification of processes, which on the one hand is connected with the April 24 [anniversary of the Armenian genocide] and on the other the fact that there is no progress on Armenian prisoners and other issues,” he told RFE/RL’s Armenian Service.

Russia, France and the United States have long been spearheading international efforts to end the Karabakh conflict in their capacity as co-chairs of the OSCE Minsk Group. Moscow single-handedly stopped the autumn war over the disputed territory with an Armenian-Azerbaijani ceasefire deal brokered by Putin on November 9.

“The objective is to step up the work of the OSCE Minsk Group,” said Lacote. “Russia is obviously part of this process because Moscow is present in Karabakh, and the objective is the resumption of a political process so that issues that were not settled by the November 9 document are discussed.”

“We have a ceasefire, which is an important achievement, but there are also many unresolved issues that need to be addressed in the Minsk Group format,” the envoy stressed, adding that the unconditional release of the Armenian prisoners is one of them.

The Kremlin reported earlier this week that Putin and Macron “reviewed the developments around Nagorno-Karabakh.”

“The parties expressed mutual readiness for coordination on various aspects of the Nagorno-Karabakh settlement, including through the OSCE Minsk Group,” it said in a statement.
The truce agreement calls for the release of all prisoners held by the conflicting sides. A total of 69 Armenian prisoners of war (POWs) and civilians have been freed to date. More than 100 others are believed to remain in Azerbaijani captivity. Baku is reluctant to repatriate them, having branded them as “terrorists.”

The European Union said on Wednesday that all remaining Armenian captives must be set free “as soon as possible” and “regardless of the circumstances of their arrest.”