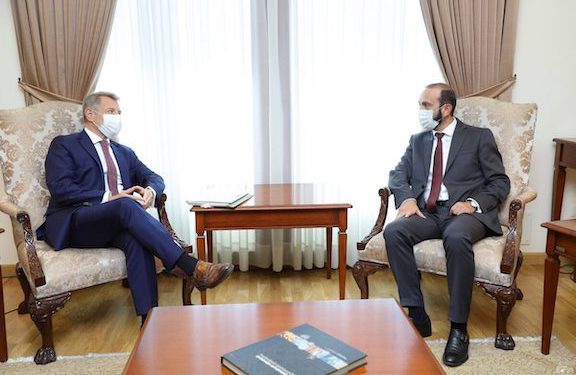 France’s co-chair of the OSCE Minsk Group, Stephane Visconti, on Monday called for the immediate resumption of talks for the settlement of the Karabakh conflict, during a meeting in Yerevan with Armenia’s Foreign Minister Ararat Mirzoyan.

Echoing the sentiment expressed by the French diplomat, Mirzoyan said that Armenia supports the positions voiced by the Minsk Group co-chairs, especially the need for a stable and lasting settlement of the conflict based on the principles outlined by the mediators.

Mirzoyan also drew Visconti’s attention to the humanitarian crisis created as a result of the 44-Day War, emphasizing the need for the immediate and unconditional return of all Armenian prisoners of wars and captives being held in Azerbaijan.

During his meeting with Prime Minister Nikol Pashinyan later on Monday, Visconti discussed need for a settlement of the Karabakh conflict, as outlined by the OSCE co-chairs.