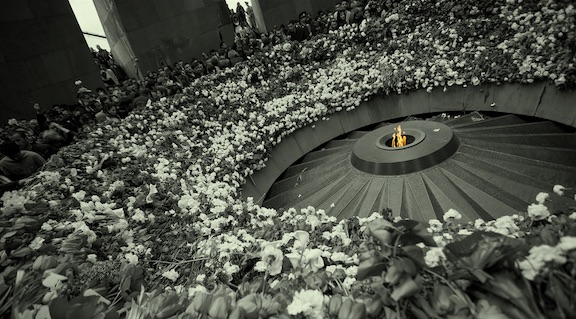 Community members can take action this month by reaching out to their local high school urging them to include the Armenian Genocide in their curriculum. Learning about the example of the Turkish government’s annihilation of Armenians (1915-1918) through the stories of individual survivors and their descendants provides an instant gateway for students to understand genocide, its continuing damage, and its relationship to human rights issues in today’s world.

Below are survivor-focused classroom resources that can be offered to local social studies teachers:

iwitness: Artists Ara Oshagan and Levon Parian began photographing survivors of the Armenian Genocide in 1995, a project that also evolved to include oral history and culminated with an exhibit called iwitness, which was exhibited widely, including the 2015 public art exhibit in downtown Los Angeles, seen above (by Ara Oshagan, Levon Parian, Vahagn Thomassian, Narineh Mirzaeian.) The portrait photos and short survivor testimonies form the base of GenEd’s “iwitness” student activity.

Near East Relief “Upstanders”: Even during genocide, there are people who risk their lives to help the victims. There are perhaps no more significant examples of such “upstanders” than the workers of the Near East Relief foundation. These men and women courageously bore witness, fed, clothed, and provided medical aid to the survivors, saving over one million lives, including the ancestors of many of today’s Armenian-Americans. Find the “They Shall Not Perish” curriculum booklet here.

Rescued and Returned: This six-minute, first-person video by GenEd Executive Director Roxanne Makasdjian describes Makasdjian’s family connection to a 15th-century illuminated Book of Gospels, a precious heirloom and symbol of the long legacy of the Armenian Genocide. The “Rescued and Returned” video also accompanies the GenEd lesson “Survivor Objects,” highlighting the story and recent legal struggle over another ancient Armenian manuscript, the Zeytun Gospels.

The Armenian Journey: From Despair to Hope: This 13-minute documentary video is narrated by 21-year-old Rhode Island native Dalita Getzoyan, who describes the genocide survival story of her great-grandmother, Margaret Garabedian Der Manuelian, and includes home video of Der Manuelian recounting her story to family members around the kitchen table. The video is part of the GenEd lesson, “The Armenian Journey: From Despair to Hope in Rhode Island.”

Would Israel Normalize Relations with Germany Without Germany’s Recognition of the Holocaust?