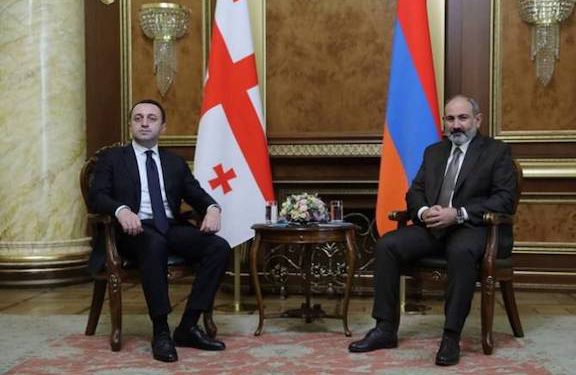 YEREVAN (Azatutyun.am)—Georgia’s Prime Minister Irakli Gharibashvili visited Yerevan and met with his Armenian counterpart Nikol Pashinian on Saturday as part of his attempts to improve Armenia’s relations with Azerbaijan.

Gharibashvili met with Azerbaijani President Ilham Aliyev in Baku late last month three weeks after receiving Pashinyan in Tbilisi. He said he discussed with Aliyev “the importance of transforming the region” but did not elaborate.

Gharibashvili also divulged few details of his latest “productive” talks with Pashinyan. He tweeted on Sunday that they discussed a “new peace initiative for the South Caucasus and Georgia’s readiness to pursue active mediation to create more opportunities for sustainable peace and development in the region.”

“Tbilisi has taken on an active mediating role in normalizing relations between its neighbors, notably Armenia and Azerbaijan,” the Georgian premier told reporters on Monday. He again did not go into details.

An Armenian government statement on the talks said the two leaders “exchanged thoughts on the situation and developments in the region.”

“The parties reaffirmed their readiness to consistently deepen bilateral friendly ties and agreed to continue their active dialogue,” added the statement.

Speaking ahead of his September 29 trip to Baku, Gharibashvili said he could play a “positive role” in building bridges between Georgia’s two South Caucasus neighbors locked in a bitter conflict over Nagorno-Karabakh. His foreign minister, Davit Zalkaliani, said on Friday that he has already helped to establish “active communication” between Yerevan and Baku.

In June, the Georgian government facilitated the release of 15 Armenian soldiers, taken prisoner by Azerbaijan during last year’s war in Nagorno-Karabakh, in exchange for maps of Armenian minefields provided to Baku. It is not clear whether Tbilisi hopes to arrange more such swaps or assist in the opening of Armenian-Azerbaijani transport links.

Alexander Iskandaryan, the director of the Yerevan-based Caucasus Institute, noted that Armenia has until now negotiated with Azerbaijan mainly with Russian mediation.

“It’s hard to tell at this point just how serious these contacts [initiated by Georgia] are and whether they can yield any results,” Iskandaryan told RFE/RL’s Armenian Service.

Pashinian paid an official visit to Georgia on September 8. Turkish President Recep Tayyip Erdogan said afterwards that the Armenian prime minister communicated through Gharibashvili an offer to meet with him and discuss the possibility of normalizing Turkish-Armenian relations.

Erdogan appeared to make such a meeting conditional Armenia recognizing Azerbaijani sovereignty over Karabakh and agreeing to open a transport corridor that would connect Azerbaijan to Nakhichevan.

The press offices of the Armenian and Georgian premiers refused to say on Monday whether Turkish-Armenian relations were also on the agenda of their weekend talks.