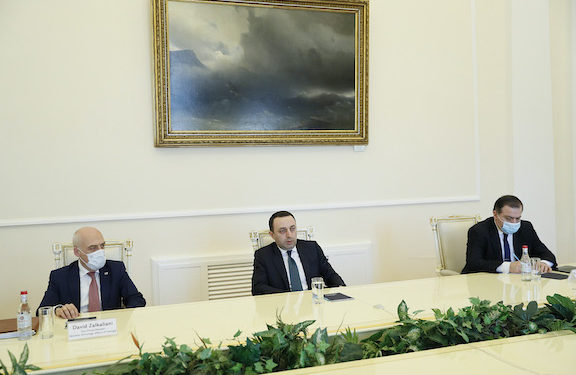 It was the first Georgian-Armenian summit held after last year’s war in Nagorno-Karabakh.
Garibashvili, who visited Baku last week, said the war as well as the coronavirus pandemic left the region facing “significant difficulties.”

“I think that there is no alternative to peace negotiations and dialogue,” he said after the talks with Pashinyan. “Georgia has always stood for cooperation and peaceful co-existence in the South Caucasus and will stick to this course.”

Pashinyan reaffirmed, for his part, Armenia’s support for a resolution of the Karabakh conflict based on peace proposals made by the U.S., Russian and French co-chairs of the OSCE Minsk Group.

Speaking at a joint news briefing, Pashinyan said he and Garibashvili agreed to “put greater emphasis on the development of trade and economic ties” between their countries.

“In particular, we stressed the importance of more effectively using regional transport routes and developing the region’s transport potential,” he said.

An Armenian government statement on the talks said the Armenian and Georgian governments support the “development of transport links, including railway infrastructures.”

“The parties expressed an interest in initiating new joint projects and agreed to work intensively in this direction,” read the statement.

It added that both sides are specifically interested in the creation of a new “transport corridor” that would connect not only Armenia and Georgia but also Iran, Bulgaria and Greece.