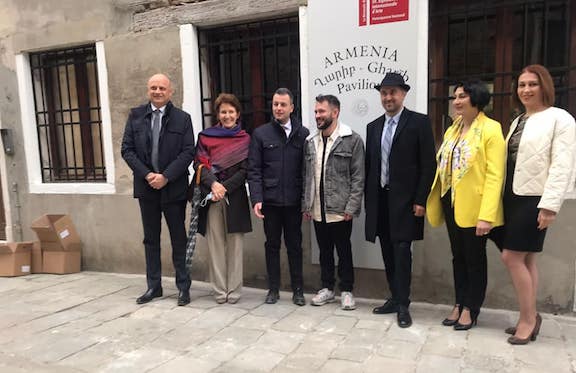 The Armenian pavilion officially opened within the framework of the 2022 Venice Biennale on April 21, the Armenian Embassy in Italy reported.

Embassy Counselor Christina Mehrabekyan offered opening remarks at the event, noting that the Armenian people, deprived of their homeland and cut off from their own roots, are more than familiar with the meaning of “gharib,” which translates to pilgrim.

1. Scenes from the opening of "Gharib" at the Armenian Pavilion at the 2022 Venice Biennale

“Today, the Armenians of Artsakh again live under the threat of ethnic cleansing and intimidation,” said Mehrabekyan, noting that one of the most important missions of culture is to exclude indifference, to pay special attention to problems and seek solutions.

RA Deputy Minister of Culture Arayik Khzmalyan was also in attendance at the event.

Glendale Armenian Community Shows Appreciation For Past and Present Mayors