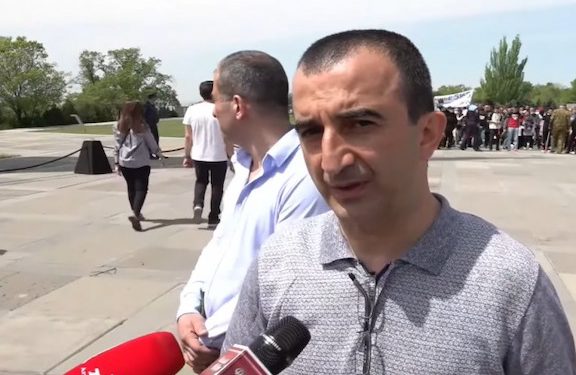 YEREVAN (Azatutyun.am)—Law-enforcement authorities have arrested the heads of two more communities of Armenia’s southeastern Syunik province in a continuing crackdown on local leaders and supporters of the main opposition Hayastan alliance.

One of them, Mkhitar Zakaryan, was taken into custody early on Monday three days after resigning as mayor of the towns of Meghri and Agarak and several nearby villages making up a single administrative unit.

The Investigative Committee said afterwards that he has been formally charged with abuse of power and fraud. Zakaryan rejected the accusations through his lawyer, Yerem Sargsyan.

Sargsyan said Zakaryan was manhandled by masked and heavily armed police officers shortly after arriving, together with him, at a police department in Yerevan. He said Zakaryan was toppled to the ground, filmed and dragged away by the officers despite not putting up any resistance.

The lawyer condemned the police actions as a gross violation of the due process aimed at humiliating and intimidating his client.

Zakaryan told RFE/RL’s Armenian Service on Saturday that he decided to step down to make sure that his community and local government employees do not suffer from fresh criminal proceedings launched against him.

“Employees of the community administration are constantly summoned to the police,” he said.
Zakaryan, who was elected to the National Assembly on the Hayastan ticket, also said he decided to take up his seat in Armenia’s new parliament.

Also detained was Suren Ohanjanian, who runs the village of Vorotan, which is part of another Syunik community comprising the town of Goris.

Ohanjanian is prosecuted in connection with financial aid allocated to 31 Vorotan residents from the community budget in early June. Prosecutors claim that he told some of them to vote for Hayastan in the June 20 general elections. The village chief’s brother flatly denied the allegation when he spoke with RFE/RL’s Armenian Service.

Lusine Avetyan, the head of another village close to Goris, was arrested a week ago because of similar cash handouts given to several local residents. She too denies trying to buy their votes.

A pro-opposition TV station based in Syunik showed one of those residents saying over the weekend that police officers bullied his wife into giving false incriminating testimony against Avetyan. The man insisted that his family was never told to back the opposition bloc which finished second in the elections.

Meanwhile, a court in Yerevan allowed law-enforcement authorities to hold the mayor of another Syunik town, Kajaran, in detention pending investigation. The mayor, Manvel Paramazyan, was arrested on Thursday and charged afterwards with vote buying and fraud.

Paramazyan and Zakaryan already faced other accusations before their arrests. They as well as the head of the Goris municipality, Arush Arushanyan, were among the heads of more than a dozen Syunik communities who issued late last year statements condemning Prime Minister Nikol Pashinyan’s handling of the autumn war with Azerbaijan and demanding his resignation.

Some of them encouraged supporters to disrupt Pashinyan’s visit to Syunik in December. The prime minister faced angry protests when he finally toured Goris, Agarak, Meghri and the provincial capital Kapan in May.

The embattled Syunik mayors and a former provincial governor, Vahe Hakobyan, lead an opposition party affiliated with Hayastan. The opposition bloc headed by former President Robert Kocharian last week condemned the continuing “repressions” against its members and said that they will “further deepen the political crisis” in Armenia.

Speaking at a campaign rally in Kajaran, he said: “I promise you that you will see those scumbag officials lying here on the asphalt.”

Pashinyan repeatedly brandished on the campaign trail a hammer symbolizing a popular “steel mandate” which he said will allow him to rule Armenia with a more firm hand.

“With this thing we will be taking out those rusty nails, upstarts huddling in various municipalities from many places, including this place,” he told supporters in Sisian, another Syunik town run by an anti-Pashinyan mayor.

Former President Robert Kocharian’s Hayastan alliance on Tuesday strongly condemned the arrests of four heads of local communities affiliated with it, saying that the Armenian authorities are trying to suppress the country’s leading opposition force.

“Political persecutions are continuing and we will fight against them by all means to prevent them from breaking up our people’s resistance and isolating our supporters with trumped-up accusations,” the Armenian Revolutionary Federation’s Ishkhan Saghatelyan said for his part.

“If it were up to Nikol [Pashinyan] he would arrest all 270,000 citizens who voted for us,” Saghatelyan told a joint news conference with Hakobyan. “It’s evident that they will try to continue the repressions but … they don’t realize that this will not subdue us or stop our struggle.”