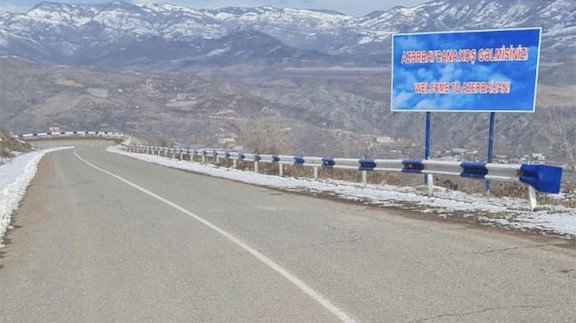 YEREVAN (Azatutyun.am)—The Armenian government has pledged to build or repair roads bypassing areas along Armenia’s southeastern Syunik province controversially handed over to Azerbaijan as a result of the Russian-brokered ceasefire in the Nagorno-Karabakh conflict zone.

Syunik borders the Zangelan and Kubatli districts southwest of Karabakh which were mostly recaptured by Azerbaijan during the autumn war in Karabakh. Armenian army units and local militias completed in December their withdrawal from parts of the districts close to Syunik’s capital Kapan and many other communities.

Some of those lands are located along the Soviet-era Armenian-Azerbaijani border which has never been demarcated due to the Karabakh conflict. Local government officials in Syunik and opposition figures in Yerevan have accused Prime Minister Nikol Pashinian of hastily and illegally ceding them to Baku. Pashinian has insisted that “not a single inch” of Armenia’s internationally recognized territory has been lost as a result of the troop withdrawal.

Under further Armenian-Azerbaijan agreements reached after the ceasefire deal, Syunik residents are still able to travel along those road sections without any restrictions. Their security is to be guaranteed by Russian military posts set up there recently.

With the Karabakh conflict still unresolved, many Syunik residents are wary of using the roads for safety reasons. Their concerns have been aggravated by several reported cases of Azerbaijani border guards and soldiers standing on the contested road sections and watching car traffic through them.

“As soon as weather conditions allow, we will build them,” Papikyan said without elaborating.
Travelers can also navigate between Kapan and Goris through another road located deeper inside Armenian territory. But its principal 42-kilometer section has been barely used since the early 1990s and has fallen into disrepair.

Azerbaijani border guards are seen from the Armenian village of Syunik, February 8, 2021.
A government-funded reconstruction of 12 kilometers of that road was completed last year shortly before the outbreak of the Armenian-Azerbaijani war. The government planned to refurbish a second, 17-kilometer section of it this year.

“Given the new situation, we have called for the reconstruction of the entire 30-kilometer stretch [in 2021,]” Kapan Mayor Gevorg Parsyan told RFE/RL’s Armenian Service on Thursday.

Parsyan said the government is also planning to build from scratch another highway that will bypass the 4-kilometer road stretch that also technically belongs to Azerbaijan now. He said local authorities want a longer bypass that will reach villages located farther from Syunik’s main city.

The government is also understood to be planning to repair a road connecting Kapan to three other Armenian villages.

The new roads will not address all security concerns of residents of the Armenian border communities. Some of them are now located just a few hundred meters from nearest Azerbaijani military posts.

In a village just east of Kapan, also called Syunik, the house belonging to Martun Arzumanyan is now separated from Azerbaijan by the Voghji river. On a recent afternoon, two Azerbaijani servicemen could be seen manning a border post overlooking the village.

“When they talk to each other loudly you can hear them,” Arzumanian told RFE/RL’s Armenian Service. “The river is only 10-12 meters wide. They can hit us even with stones.”
“How can you not be alarmed when the enemy is only a few meters away?” said another villager, Anushavan Sargsyan.

Another village, Shurnukh, straddles the existing Kapan-Goris highway. It was effectively divided into two parts as a result of the Armenian-Azerbaijani border delimitation.

Twelve Shurnukh houses are on what is now the Azerbaijani side of the frontier. Their residents were evacuated before Azerbaijani forces entered that part of the village in December. The Armenian government has pledged to build new homes for them.