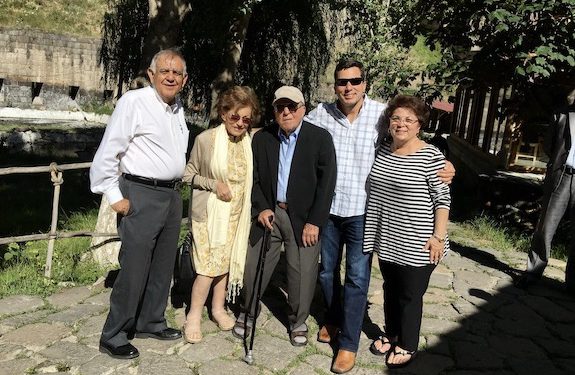 This summer will mark the fifth anniversary of the opening of the Shirvanian Youth Center in Gyumri, which was made possible by a generous contribution and lifetime of dedication to empowering youth by the late Hacob and Mina Shirvanian.

Since the youth center opened its doors in July, 2016, through the efforts of the “We Are Gyumri” initiative, it has offered after school programs, arts and culture classes, as well as computer and IT training to the youth of Gyumri. One of its signature programs has become the annual scholarships that awarded to local youth. This program was named for Mina Shirvanian after she passed away in 2017.

The Shirvanian Youth Center also became a hub during the Artsakh War last fall, when local youth gathered to provide assistance to those displaced by the war and the Azerbaijani aggression against Artsakh that claimed so many innocent lives.
The center’s activities, as well as the scholarship program, are funded through generous donations to the “We Are Gyumri” committee from supporters and community activists. Hacob and Mina Shirvanian’s family members have been pivotal in ensuring the continued advancement of the center.

The Shirvanians’ daughter, Alice Petrossian and her husband, Vahik, continued this legacy with their most recent donation of $8,000 to the “We Are Gyumri” committee, which will be allocated toward the continued operation of the Shirvanian Youth Center and help young Gyumri residents advance their education through the Mina Shirvanian Scholarship Fund.

In September, the “We Are Gyumri” committee announced the names of the 12 recipients of the 2020 Mina Shirvanian Scholarship, nine of whom were awarded for the first time, while three were continuing scholars. Since the scholarship program was launched in 2015, there have been 34 scholarship recipients, of whom 22 have graduated.

The “We Are Gyumri” committee, which is an initiative of the ARF Western U.S. Central Committee, extended its heartfelt gratitude to Mr. and Mrs. Vahik and Alice Petrossian, as well as to the other dedicated community members who have supported the initiative and made the 2020-2021 scholarships possible.

“We thank you for always supporting our efforts,” said the “We Are Gyumri” committee chairman Shant Baboujian. “Your unwavering dedication also allows us to provide valuable scholarships through the Mina Shirvanian Scholarship Fund.”

The Scholarship Fund, strictly available for residents of Shirak, is designed to encourage the youth in Gyumri to further their education without having to leave their homeland. The annual tuition is $750 per student. To sponsor a student or donate to the Mina Shirvanian Scholarship Fund, please click “We Are Gyumri” or send a check payable to “ACF” to ACF Shirak Youth Center, 104 N Belmont Avenue, Suite 300, Glendale, CA 91206.

The mission of the “We Are Gyumri” committee is to create a positive and lasting impact on youth in Gyumri, Armenia. The campaign restructured and renovated the Shirvanian Youth Center in Gyumri that had been destroyed during the 1988 earthquake. A year-round functional program was created at the center to teach youth in Gyumri everyday skills, to provide them with the essentials they need for a brighter future, and to serve as a bridge between youth in Gyumri and their peers in the Diaspora. As another component of the campaign, the “We Are Gyumri” Mina Shirvanian Scholarship Fund is intended for residents of the Shirak Province to pursue their undergraduate education in their native region.