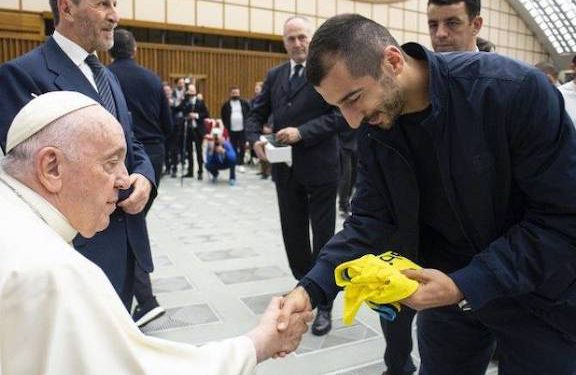 Henrikh Mkhitaryan met Pope Francis at the Vatican on Nov. 14

Henrikh Mkhitaryan, the former midfielder of the national soccer team of Armenia, member of Inter Milan team, met with Pope Francis and presented him with his soccer jersey, the Vatican News reported on Monday.

A soccer match called “We are playing for peace” was held at the Olympic stadium in Rome, which was attended by many renowned soccer players, including Henrikh Mkhitaryan. The tournament is being organized for the third time by the Pontifical Foundation Scholas Occurrentes foundation. Before the match, the Pope welcomed the players, the organizers of the competition and their families in the Vatican’s Paul VI Hall.

In his message, the pontiff thanked the athletes for advancing peace in a world marked by war.

Peace, the Pope said, is the fruit of gestures like theirs, namely “of closeness, friendship, the outstretched hand, always,” and “not with the stone in your hand to throw it.

These “seeds of peace,” he said, may be small, but “are capable of changing the world.”

The athletes had the opportunity to approach the Pope and communicate with him, giving him various gifts. Mkhitaryan presented the Pope his jersey.

ANCA-Western Region: France's Senate Did the Right Thing and Now Congress Must Do the Same