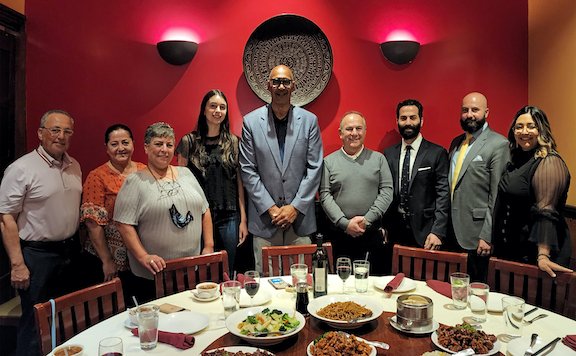 Assemblymember Chris Holden with representatives of the Pasadena Chapters of the ANCA, ARS, and Hamazkayin

PASADENA—The Pasadena Chapter of the Armenian National Committee of America held a joint meeting on May 6 with Assemblymember Chris Holden, representing the 41st Assembly District, and the Pasadena chapters of the Armenian Cultural Foundation, the Armenian Relief Society, and Hamazkayin Armenian Educational and Cultural Society.

The Assemblymember gave an in-depth account of his office’s recent initiatives concerning Armenians and Armenian Americans, including the establishment of the California-Syunik Sister-State relationship, and advocating – in writing – for the State of California to withdraw from all existing California government investments held by Turkey.

“It’s incredible to see advocacy across the generations of the Armenian Diaspora here in my district with the ANCA – Pasadena Chapter,” said Assemblymember Chris Holden. “I enjoyed learning about the actions the community has taken on during the pandemic and how organizations like Armenian Relief Society continue to serve all people in the community that knock on their door for help.”

“We must continue our constructive dialogue on issues of concern for the Armenian-American community, and we have always been able to rely upon Assemblymember Holden’s openness toward the Pasadena Chapter of the ANCA and its sister-organizations, his willingness to collaborate, and his readiness to facilitate assistance through the resources of his office,” said Donabedian.

Former treasurer and current adviser to the ANCA – Pasadena Chapter David Gevorkyan presented a brief history of the longtime relationship between Assemblymember Holden and the Armenian American community he has represented for decades. “The Armenian American community has prevailed in selecting Chris Holden as its State Assembly representative – not just within the century-old Armenian community in Pasadena, but beyond the district throughout the State of California,” said Gevorkyan.

Gevorkyan also inquired about opportunities for young professionals to compete for State Fellowships and work for the State Capitol.

ANCA – Pasadena Chapter Board Secretary Garen Kirakosian, Esq. emphasized the importance of the work undertaken by the ANCA and Assemblymember Holden on various, critical issues impacting the residents and businesses of Pasadena and the surrounding areas.

Boardmember Stephanie Khatchikian inquired about ways to increase youth engagement in the district’s community affairs and the Assemblymember’s office.

The Armenian National Committee of America – Pasadena Chapter is the oldest, largest, and most influential Armenian-American grassroots organization of its kind within the City of Pasadena. Founded in 1979, the Pasadena ANCA advocates for the social, economic, cultural, and political rights of the city’s thriving Armenian-American community and promotes increased civic service and participation at the grassroots and public policy levels.

Warsaw Stock Exchange to Acquire 65% Stake in Armenia’s Securities Exchange. What Does it Mean?