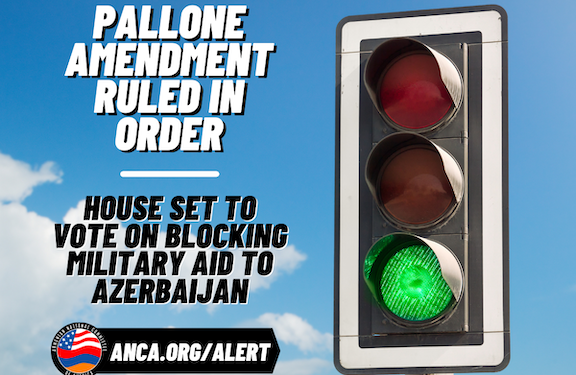 The House vote on the Pallone amendment to the FY2022 foreign aid bill (H.R.4373) can come as early as Wednesday.  Pro-Artsakh/Armenia advocates can write, call, and tweet their U.S. Representatives to vote for the amendment by visiting anca.org/alert.

“We welcome today’s decision by Chairman McGovern and the Rules Committee and look forward to the opportunity for each Member of the House to have an opportunity to cast a long overdue ‘up-or-down’ vote on whether American tax dollars should be subsidizing the army of oil-rich Azerbaijani dictator Ilham Aliyev,” said ANCA Executive Director Aram Hamparian. “In the hours leading up to this pivotal vote, we encourage our community and coalition partners to ask their Representatives to vote YES on the Pallone Amendment.”

The Pallone Amendment states, “None of the funds appropriated or otherwise made available by this Act [H.R.4373] under ‘International Military Education and Training’ and ‘Foreign Military Financing Program’ may be made available for Azerbaijan.”  The provision does not block discretionary military equipment which may be transferred by the Department of Defense under U.S. laws Section 333.  The ANCA is working with Senate and House Members of the Armed Services Committee to address those concerns by strengthening Section 907 restrictions on U.S. military aid to Azerbaijan.

The ANCA has distributed to Members of Congress a point-by-point analysis of the immediate need to block all military aid to Azerbaijan, citing their ongoing attacks against Armenia and Artsakh, and the encroachment of over 1000 Azerbaijani soldiers on sovereign Armenian territory.  The document is available at https://anca.org/PalloneAmendment

A second amendment to H.R.4373, led by Rep. Jackie Speier (D-CA), which would have increase foreign military financing to Armenia by $3 million, was ruled out of order.