How Can the Armenian Patriarch Be as Pro-Turkish as Erdogan? 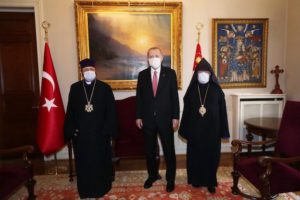 The Armenian Patriarch of Turkey, Sahak Mashalian, once again issued a pro-Turkish statement, this time on the eve of the anniversary of the Armenian Genocide, trying to please his Turkish masters and undermine President Joe Biden’s April 24 acknowledgment.

We all understand that the Armenian community and the Patriarch in Turkey are hostages in the hands of the Turkish government. As such, they are under pressure to make pro-Turkish statements. However, there are red lines that no Armenian should cross, regardless of the circumstances or reasons. Our ancestors sacrificed their lives during the genocide, not succumbing to Turkish pressures and physical threats. The Patriarch, who is supposed to be a man of God, is obligated to tell the truth even if his life is in danger.

As I have suggested before, if the Patriarch does not want to get in trouble with the Turkish authorities, he should simply keep his mouth shut. He should not volunteer to issue statements on non-religious issues and not desecrate the memories of 1.5 million perished Armenians. We should not jump to the conclusion that every time the Patriarch issues a pro-Turkish statement he is necessarily doing it under duress. Furthermore, the Patriarch should ask himself if the Armenian community has received any benefits in return for his multiple pro-Turkish statements.

Certainly, the Turkish government has repeatedly exploited the Patriarch’s words to disseminate pro-Turkish propaganda worldwide. For example, on April 23, 2021, when it became known that President Biden would issue his much anticipated acknowledgment of the Armenian Genocide, the Anadolu Agency (AA), the official Turkish government’s news service, reported Patriarch Mashalian’s condemnation of President Biden’s upcoming statement. The AA headlined its ‘news’ with the Patriarch’s words: “Using 1915 incidents for politics saddens Armenians.”

How could President Biden’s acknowledgment of the genocide, welcomed by Armenians worldwide, “sadden Armenians?” On the contrary it saddened the denialist Turks and thrilled Armenians. Patriarch Mashalian should just stick to religious subjects and not pronounce judgements on other matters. Regardless of whether he is pressured by the Turkish government to make political statements or does it voluntarily, the Patriarch should refrain from taking such positions, saying that as a clergyman he only deals with religious subjects.

Here are excerpts from the pro-Turkish statement made by Patriarch Mashalian on April 23, 2021, to the Anadolu Agency which was publicized widely in the Turkish media:

“It saddens us to see that the suffering of our people and the suffering of our ancestors are instrumentalized by some countries for everyday political purposes. The tension caused by the usage of the issue in parliamentary agendas for decades has not served the rapprochement of the two nations. On the contrary, it provokes hostile feelings and delays peace. We, just like our predecessors and late Patriarchs, will continue to wish for peace, friendship and well-being between Turks and Armenians. We will encourage the rebuilding of relations based on neighborhood and common grounds speedily. We prefer to be one of those who hopefully expect the revival of neighborly relations, which are unique to these lands and exist in the traditions of the two communities, between Turkey and Armenia’s authorities. Dear Recep Tayyip Erdogan, during his time as both Prime Minister and President, has been the only top state official in the history of the Turkish Republic to give messages on this occasion. These messages show a spirit, sharing our pain and a certain respect for the children of our nation that lost their lives in exile. In our opinion, it would be appropriate to take these as positive steps towards rapprochement in the future. If only the joint history commission they [Turkey] proposed could have been established, then at least 15 years of progress would have been made. If only the [Armenia-Turkey] protocols could have been implemented, borders could have been opened. Then the resolution of the Karabakh [issue] could have resulted differently. We still do not think it is late. The project to build a six-country basin, proposed by our Dear President for Caucasia, can bring the peace of the century to the communities in the region.”

Leaving no doubt as to the pro-Turkish position of the Patriarch, Turkey’s Communications Director Fahrettin Altun endorsed his statement: “Sahak Mashalian, the Armenian Patriarch of Turkey, aptly noted that past sufferings must not be exploited for short-term political gains. [The Patriarch said]: ‘We will continue to live together, peacefully and as brothers and sisters, in this land.’”

Turkey’s presidential spokesman Ibrahim Kalin also expressed support for Mashalian’s remarks: “Abusing history for a narrow political agenda helps neither the past nor the present.”

Interestingly, President Erdogan sent a letter to the Armenian Patriarch on April 24, denying the Armenian Genocide and agreeing with the Patriarch’s words. It is not surprising that the Turkish government supported Archbishop Mashalian’s candidacy for the Patriarchal elections over other less subservient candidates.

The Patriarch must realize that by making propaganda statements on behalf of Turkey, he is losing the respect of Armenians both inside and outside Turkey. His anti-Armenian words are viewed as those of a sold out Turkish agent. The Armenian Church and Armenians in Turkey should pressure the Patriarch to resign since he has lost the support of the Armenian community and can no longer function as their religious leader.

The only countries around the world that criticized President Biden’s April 24 statement were: Turkey, Azerbaijan, Pakistan and the unrecognized Turkish Republic of Northern Cyprus. This places the Armenian Patriarch in the shameful company of the enemies of the Armenian nation!