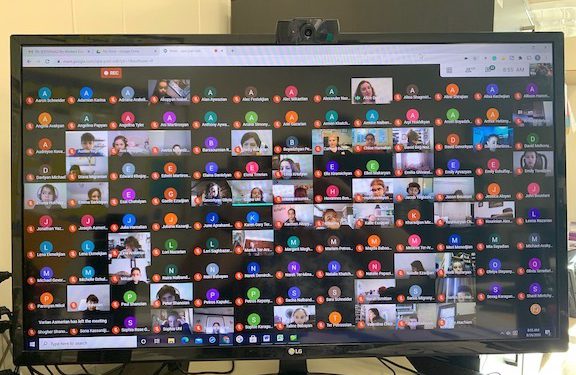 At these difficult times, during the pandemic, being a music teacher and an educator became more important than ever for me, it became a moral duty. Teaching in an Armenian school became a way to bring the community together in front of grave challenges that we had never faced before. Every time I login to class and hear, “Good morning Mrs. Alice,” “Hi Mrs. Alice, inchbeses?” I feel a greater share of responsibility and profound need to pass on intellectual nourishment to our youth.

After what our country went through during the Artsakh war, every day of existence is a celebration and a mission to preserve and cultivate our Armenian heritage, traditions, and morals. At the same time, it is important to strengthen our younger generation by motivating them to be more involved in local matters and cultivate their feeling of belonging as equal citizens of the United States with all the rights and responsibilities.

Merdinian School stands out as a unique institution, where pursuit of excellence always goes hand in hand with great values and morals. In order to reflect our Christian values, our American nationality, and our Armenian cultural heritage, each Monday’s Chapel music event is filled with empathy and respect to the prevailing holidays and historic events both of our homeland, Armenia, and the United States. Our role as Armenians shouldn’t be limited to understanding our own cultural background only, but also to learn about the surrounding cultures and their musical traditions.

Here is a brief view of some of our virtual chapel music meetings.

For the occasion of Thanksgiving, the topic of study was Native American musical instruments used by Wampanoag tribes who welcomed the Pilgrims in 1620 in Plymouth Rock.

On Christmas, students learned about the Origin of Christmas Carols and the evolution of the Carols throughout the church’s reform during the  Elizabethan times in England.

In January, when America celebrates Dr. Martin Luther King Jr. day, students learned about Jazz, with a focus on a few world-famous Jazz musicians who were born and raised in segregated communities. Among those were Louis Armstrong, Duke Ellington, and Miles Davis, who became Jazz icons and created America’s image as “The Capital of Jazz.”

To further emphasize Dr. King Jr.’s message and legacy, students listened to Aretha Franklin’s “Mary Don’t You Weep,” a Gospel based on a spiritual that originated before the civil war. It shows the great strength and the perseverance of the slaves who never lost hope. They also learned about “Battle Hymn of the Republic,” which originated during the civil war, whose lyrics were written by American abolitionist poet and author, Julya Wards.

All over the world, it is through music and meaningful songs, that we cry our battles and mourn our soldiers. Through music we boost the morale of our troops, with a feeling of devotion and strong bonds to the homeland. As the “Battle Hymn of the Republic” symbolizes hope, patriotism, and freedom for Americans, “Mardigi Yerke,” also known as “Trcheyi Mdkov Dun,” symbolizes nostalgia, comforting our Armenian soldiers in the borders of Artsakh and Armenia. Through the song a deep grief, message of love, and reassurance were sent to the mothers waiting for their sons to hopefully return home. On the occasion of Armenian Army day, we listened to “Mardigi Yerk” and wished our National Army strength and prosperous victories with the “Haygagan Panagi Yerk.”

It is incredible how technology eased and strengthened teacher-student bonds during virtual learning. At Merdianian, overnight, students and faculty got access to Google Classroom, Slides, and Docs. Without this quick technological response it would not have been possible to create the strong virtual learning environment we have. Thank you to our technology and curriculum coordinator Betty Nazarian who worked tirelessly to guide us through this technological endeavor during the pandemic. Last but not least, our deepest gratitude goes to Merdinian School Principal Mrs. Lina Arslanian for her selfless devotion and unlimited support and dedication to the faculty, staff, and students.

Alice Derkevorkian is a Music teacher at Merdinian Armenian Evangelical School in Sherman Oaks, Calif. She is a pianist, accompanist, and educator who has lived in Los Angeles-area since 2007.