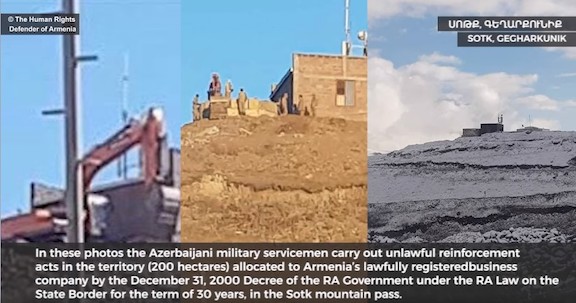 Tatoyan firmly stood by his assertions despite a rebuke by Armenia’s Defense Ministry, which accused the Human Rights Defender of not having all his facts.

Last week, Tatoyan said that the Defense Ministry, along with Armenia’s National Security Service, had embarked on a campaign to discredit his office.

“We are publishing factual analysis of the illegal deployment of Azerbaijani armed forces in the immediate vicinity of villages in the Gegharkunik region and the unlawful construction to fortify their positions,” said Tatoyan in a Facebook post on Thursday.

Tatoyan explained that due to the criminal actions by Azerbaijan, an Armenian company which has a government-issued license cannot use almost 500 acres of land, on 75 acres of which it operates two wind turbines, thus depriving Armenians of their right to do business.

The Human Rights Defender also warned that the civilian population in the area is in danger because of sporadic shooting from Azerbaijani forces.

“We are talking about the Gegharkunik Province of Armenia—the border regions where the Azerbaijani military has positioned itself since May 12. Attempts are regularly made by Azerbaijan to use heavy engineering equipment to pave roads leading to their combat positions,” said Sargsyan.

“Nevertheless, we are preventing all those attempts, and this has been announced several times before,” insisted Sargsyan.