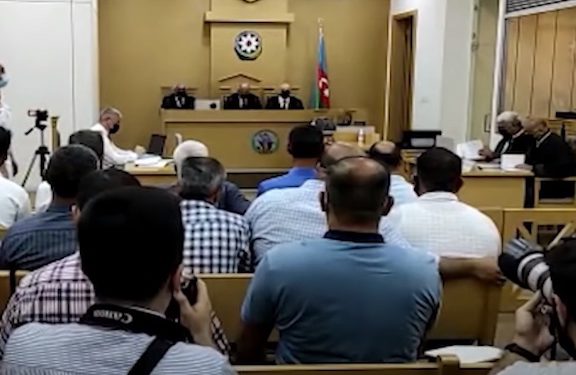 Hearings are being held in Azerbaijani courts against Armenian POWs

Azerbaijan is continuing to hold illegal court hearings against Armenian prisoners of war, during which trumped up charges of alleged torture and abuse of Azerbaijanis, as well as forming armed groups are being used to secure convictions.

In response to Armenia’s application after Azerbaijani forces captured six soldiers along Armenia’s borders on May 27, the European Court of Human Rights upheld an earlier ruling by which it mandates compliance with international mechanisms for the protection of persons captured during armed conflict and rejected a request by Baku to lift those interim measures.

The court also said that Azerbaijan had provided medical information about the recent captives and had presented its indictments to the European body.

Tatoyan emphasized that the aforementioned men were captured within the margins of the Artsakh conflict adding that the conflict has not ended.

“Therefore, any kind of prosecution or trial against any of them is a gross violation of international law, and their detention is a prohibited punishment. These rules directly derive from requirements of international humanitarian law,” explained Tatoyan.

“The anti-Armenian policy and the hostility by the Azerbaijani authorities, in turn, comes to confirm the illegality of criminal proceedings and makes it senseless to talk about guaranteeing any human right. In these conditions, the right to life of prisoners is obviously endangered, vital rights are violated,” said Tatoyan.

He stressed that the Azerbaijani authorities do not publish the real number of prisoners.

“Human Rights Defender’s investigations, complaints from the parents of prisoners and missing persons, clearly show that the trials are causing additional mental duress to their families, and are causing tension within Armenian society. Therefore, these trials contradict the foundations of international law, grossly violate the rights of prisoners and the missing, their families, and openly politicize humanitarian issues,” explained Tatoyan.