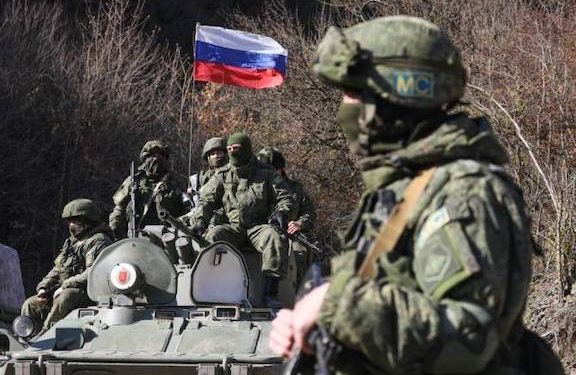 In response to criticism from Prime Nikol Pashinyan about the role of the Russian peacekeeping contingent in Artsakh, Russia’s Foreign Minister Sergei Lavrov said on Friday that Moscow had not seen concrete proposals from Armenia on the matter.

Armenia’s Foreign Ministry contended on Friday, saying that Yerevan had made its position known as far back as February 2021.

“Armenia’s concerns regarding the need to increase the effectiveness of the activities of the Russian peacekeeping troops and the emergence of possible issues in the future, among other cases, were transferred in writing to the top leadership of Russia in February 2021,” Armenia’s foreign ministry spokesperson Vahan Hunanyan said in a press statement, without elaborating on the specifics of the said proposal.

After two Artsakh soldiers were killed and 19 other wounded as a result of ongoing Azerbaijani attacks in the Berdzor region, Pashinyan on Thursday told his cabinet that adjustments were needed in the role of the Russian peacekeeping mission.

He cited examples of Azerbaijani attacks at Artsakh’s line of contact, which is under the protection of the Russian peacekeepers and called into question their approach to these matters. The most recent example cited by Pashinyan was the Azerbaijani incursion into Parukh village in Artsakh’s Askeran district in March, when Azerbaijani forces also advanced their positions onto the Karaglukh Heights and continue to remain there.

“It’s hard for me to answer this question because we haven’t seen concrete proposals which the Armenian prime minister wants to discuss in the context of the Russian peacekeeping operation in Nagorno-Karabakh. So I can’t guess now,” Lavrov said Friday, commenting on Pashinyan’s remarks.

Evidently, the statement by Armenia’s foreign ministry in response to Lavrov was meant to suggest that the effectiveness of the Russian peacekeepers has been on Yerevan’s agenda from the moment military actions were halted after the 2020 war.

Major General Andrei Volkov, the commander of the Russian peacekeeping forces in Artsakh, complained during a meeting with Artsakh’s political representatives, that they lacked personnel and the powers to prevent Azerbaijani attacks.

Nevertheless, he assured the meeting participants that Moscow would prevent another escalation in military tensions.

The Russian foreign ministry on Thursday voiced Moscow’s concern over the surge in tensions in Artsakh and said that the peacekeepers were taking all necessary steps to stabilize the situation.

“The Russian peacekeepers are making all necessary efforts to stabilize the situation on the spot. Active work is being done with both sides through all channels and all levels, including the country’s top leadership. Russian Foreign Minister Sergei Lavrov is in close contact with his Azerbaijani and Armenian counterparts,” the Foreign Ministry said in a statement on Thursday.

“We call on the sides to show restraint and observe the ceasefire regime. The settlement of existing disagreements should take place exclusively through political-diplomatic means by taking into account the positions of the sides and strictly observing the provisions of the 2020 November 9 statement of the leaders of Russia, Azerbaijan and Armenia,” added the foreign ministry.