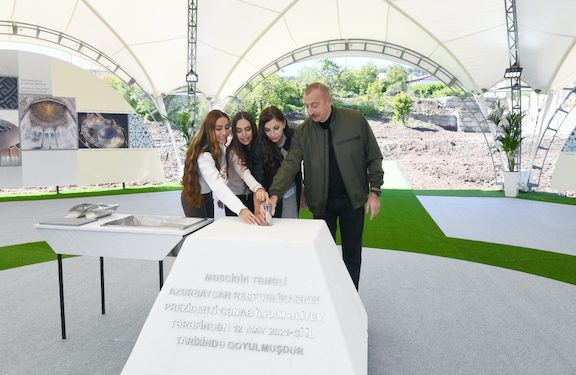 Azerbaijani President Ilham Aliyev with his wife and daughters in Shushi on May 12 inaugurating a new mosque, which will be shaped like the number “8” to reflect November 8, the day Azerbaijan invaded Shushi

President Ilham Aliyev of Azerbaijan visited Shushi and laid the foundation for a new mosque he has commissioned to be build in the city, which is currently under Azerbaijani occupation following the November 9 agreement.

“I made the decision to build a mosque a long time ago. After the liberation of Shush(a) from the occupiers, I began to think about the architecture of this mosque,” Aliyev said according to the Azer Tac news agency.

“Finally, an idea came to my mind that this mosque and its architecture should be symbolic. Therefore, I suggested that the shape of the mosque reflect figure ‘8’ because we liberated Shusha from the occupiers on November 8, and November 8 is officially Victory Day in Azerbaijan. The two minarets of the mosque should reflect figure ’11’ because it was in the eleventh month that Shusha and Karabakh were completely liberated from occupation,” added Aliyev who was accompanied on the trip by his wife and Azerbaijan’s Vice-President Mehriban Aliyeva and two of their daughters.

Last week, Artsakh’s Human Rights Defender sounded the alarm about Azerbaijanis dismantling the Ghazanchetsots Cathedral in Shushi, posting a picture of the church surrounded by scaffolding with its dome missing and all traces of its Armenian identity destroyed.

U.S. ‘Expects’ Azerbaijan to Pull Back from Armenia Border