Following the Footprints of Armenians in the UAE 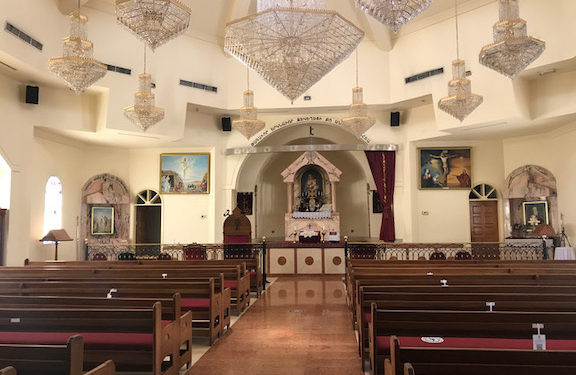 I was in Yerevan when a friend told me that there’s a group trip from Yerevan to Dubai, a major city of the United Arab Emirates. UAE was one of the first destinations that had opened up its borders after the travel restrictions put in place due to COVID-19.

I grabbed the opportunity to visit Dubai, see its futuristic glamour, and also meet the Armenian community and write a report.

My last trip before the pandemic, where I visited an Armenian community and wrote about its history, was Istanbul, which was in October of 2019—  afterwards the world shut down.

Let’s take a look at how Dubai went from a fishing village to a global sensation and a futuristic city.

Dubai is one of the seven states of the AUE—with Abu-Dhabi as its capital. Prior to the discovery of oil reserves in the Emirates, the key industry of the Emirates was pearl diving and fishing.

In the 1950s, before the discovery of oil, if you were to travel to Dubai you would have seen that it was mostly inhabited by Bedouins, who were engaged in cultivation of dates, breeding camels and goats, as well as fishing and pearl diving.

With the discovery of oil and natural gas, both on land and in its waters, the United Arab Emirates moved away from its earlier dependence on pearl trading, fishing, and agriculture, into an economy dominated by natural resources.

Eventually the little oil that was discovered in the 1950s went towards building the Dubai we know today. Dubai began shipping its oil in 1969 and gained independence from Great Britain in 1971, becoming one of the UAE’s seven emirates.

The late Sheikh Rashid, who had a great vision and leadership, began transforming Dubai from a small cluster of settlements in the 1950s to a modern port as it became the Port Rashid.

Sheikh Rashid’s vision allowed the UAE to push ahead with ambitious plans for the development  of economy and distribution of wealth for his people. Today, of the nine million living in Dubai only one million are natives. The locals are totally insured for life by the government.

During half a century, Dubai exploded in growth, with wonders of cutting-edge buildings such as the Burj Khalifa, which is the tallest building in the world.

To learn about Armenians in the Emirates, I contacted the office of the Armenian Church in Sharjah, a city in the Emirates—about an hour away from Dubai.

The arrival of Armenians in Dubai, goes hand in hand with the development of Dubai. With the beginning of oil production in the 1950s, a small number of Armenians from Iran, Syria and Lebanon settled in the Emirates for economic and job opportunities.

Among the first Armenians — their number was around 20 people — were engineers or craftsmen, such as ironsmiths, car technicians, etc. The main purpose was to mostly give services to the newly established oil companies. Today, the number of Armenians in the whole Emirates has reached 10,000.

Among the first service businesses that Armenians offered was a mechanic shop that Levon Djougdjougian started. It was called “Garage Boustani,” which still exists.

The first Armenian barber in Sharjah, was Robert Simonian from Iran. Agheksandr was an Armenian engineer from Tehran. He built single homes for wealthy locals. Haykaz Tahmazian, from Iran, was an ironsmith. He established his own company in 1976 by the name of “Yerevan Steel.”

Another Notable person was Shavarsh Baghdoyan from Damascus, who opened a photography shop in Sharjah in 1971. He became the photographer of the Emirate’s Sheikh and the latter presented him a piece of land as a gift. Baghdoyan built his own home on that parcel. He still lives there.

I should mention that, in those early days, Armenian employees or office worker faced the hardship of the climate. There was the extreme heat, no air-conditioning, and the scarcity of drinking water. All this made life very difficult. The majority of the early Armenians who arrived in UAE were single men who stayed under tents.

In the 1960s there was a Persian restaurant in Dubai, which became a hub for the young Armenians. They met there and got to know one other.

In the early 1970s and 1980s, due to the Lebanese civil war, the Islamic Revolution of Iran, and the Syrian government’s law that allowed exemption of military service — in return for a fee and also on condition of working in Gulf countries — there was an influx of Armenians in the UAE .

Around that time, the Armenian communities of Sharjah and Dubai seriously started to look into ways to preserve their identity by opening a church, a school, and a community center.

At that time, Kuwait, another Gulf nation, had already established an Armenian administrative center and a church. In 1979, UAE went under Kuwait’s pontification.

It is noteworthy to mention two individuals as pillars of the community. First, Dikran Tashjian who is the founder and former director of the bank of Sharjah, as well as Hrayr Soghomonian, an engineer. These two, alongside of a few others, took on the responsibility of creating an Armenian center in Sharjah

The Ara Knanoyan “one-day-school” is connected to the Church. The school opened its doors in May of 2016 and currently has 36 students enrolled. The embassy of Armenia in the UAE is in Abu-Dhabi. The land for the construction of the Armenian Church in Abu-Dhabi was gifted by the Crown Prince of Abu-Dhabi, Sheikh Mohammed bin Zayed bin Sultan Al-Nahyan in 2006.

Now about the Armenian Church and the school in Sharjah. The parcel on which the church and the school of Sharjah are built was donated by Sheikh Sultan Bin Mohammad Al Qasmi in the request of the Catholicos Aram I. The name of the church is Saint Gregory the Illuminator, or Sourb Grigor Lousavorich (in Armenian).

The school next to the church bears the name “Ohannessian,” who was its benefactor. However, most of the money for the construction of the church and the complex was collected through donations made by local Armenians.

The church was consecrated and ordained in 1998 by Catholicos Aram I, who visited the Emirates for that special occasion. In her book, Dr. Shoghig Ashekian writes, “The celebration of the opening of the church lasted two days during which the Armenian community experienced an unforgettable times…”

The school, which occupies the whole second floor of the complex next door to the church, operates once a week on Saturday mornings. The enrolled number of students varies from 150 to 180, consisting of Armenian youth between the ages of three to 16-years-old. The school has 13 classrooms. Each classroom bears the name of an Armenian author. The students of each classroom get to learn about that writer’s life and his works during the academic year.

I visited the school, and I was truly impressed by the arrangement of the classrooms and the displays of art. The kids have courses in religion, Armenian language, history, and culture. They are also exposed to Armenian songs and dances. At the complex, there’s a banquet hall which is used for community gatherings, events, and other occasions.

The first Armenian language publication in UAE was a periodical aimed for teenagers, called “Tebi Yerkir.” The paper was initiated by a group of young Armenians. However, today, members of the Armenian community follow the Armenian news online.

In 1981, the community of Sharjah started a theatre group. They called it “Theatre 81.” The group performed various plays written by Armenian playwrights. Today, there’s no longer a theatre group.

The three main groups of Armenians in UAE are from Syria, Lebanon, and Iran. There is also a number of Armenians from Jerusalem, Ethiopia and Iraq. As of late, there are even Armenian families from Armenia who have moved to the UAE.

Most Armenians consider the Emirates to be a temporary place to live until they can get a visa to move to other countries, such as America, Canada, or Europe.

A foreigner in the UAE can apply for a residency visa, but not a permanent residency permit. The residency visa must be renewed every two or three years. Foreigners there don’t have the right to apply for citizenship.

I also should mention that, in the UAE, there are around 20 Armenian-owned factories and businesses. The employees of Armenian owned business are Indians, Pakistanis, Bangladeshis, and a small number Arabs.

These were the most significant accomplishments made by the Armenian community of the UAE. I hope it was worth your time.