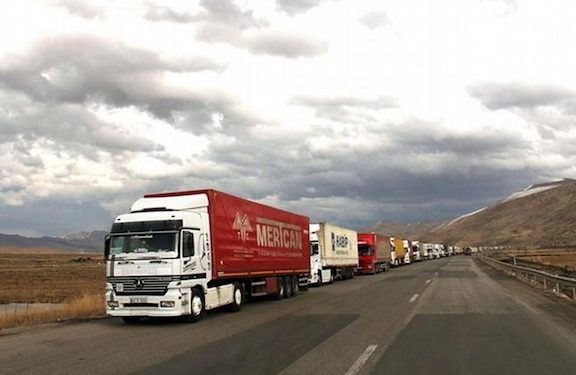 Iran reportedly has closed its roads to Turkish trucks, a Turkish official told the Russian RIA Novosti news agency. The news comes days after Azerbaijani media claimed that Iran had closed its airspace to Azerbaijani military planes flying to Nakhichevan.

Ozcan Alash, the head of the Turkish Association for the Development of Trade with Iran, told RIA Novosti that initially Tehran introduced a ban on the passage of Turkish trucks then Ankara reportedly made a decision to halt entry of Iranian trucks into Turkey as retaliation.

Baku and Tehran are in a diplomatic row over Azerbaijani forces stopping and taxing Iranian trucks en-route to Armenia on the Goris-Kapan Highway. Azerbaijani forces also arrested two Iranian truck drivers last month. The rift has escalated due to disparaging comments from official Baku, especially Azerbaijani President Ilham Aliyev, who late last month accused Iran of holding military drills near Azerbaijan’s border as a response to the highway blockade issue.

Ankara has voiced support for Baku’s policies, especially its moves on the transport link between Iran and Armenia.

He clarified that the current situation could negatively impact trade between Turkey and Iran, which has already plummeted due to the COVID-19 pandemic.