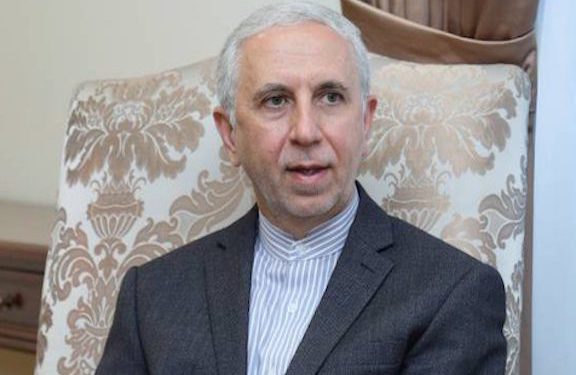 Iran’s ambassador to Yerevan decried on Monday Azerbaijan’s unacceptable move to collect tolls from Iranian trucks on the Goris-Kapan highway in southern Armenia, saying the tariffs run counter to a ceasefire deal.

In an interview with Tasnim in Yerevan, Iran’s Ambassador Abbas Badakhshan Zohouri said it is unfortunate that the Iranian trucks using the Goris-Kapan road have been required to pay toll.

According to the trilateral negotiations between Russia, Armenia and Azerbaijan, which resulted in a ceasefire deal between Yerevan and Baku following the most recent war in Nagorno-Karabakh, the situation in the transit route in southern Armenia was supposed to remain unchanged until the completion of a new route, the Iranian envoy said.

He explained that the transit route has been used during the past three decades. “The Iranian trucks pay toll on arrival in Armenia, and they are not expected to pay toll a hundred kilometers ahead as well. We expected that they (Azerbaijan) would stop it (road charging) until the bypassing road is completed, and that no problems would arise.”

In a meeting with his Armenian counterpart, held in Tehran in early October, Iranian Foreign Minister Hossein Amirabdollahian unveiled plans for a new road map leading to the expansion of relations with Armenia at the “strategic level”.

He said Iran and Armenia have outlined a new project to revive the transit of commodities and routes for the trucks traveling between the two neighbors, saying the plan would be carried out immediately.

Opposition Not Satisfied With Security Briefing About Border Situation