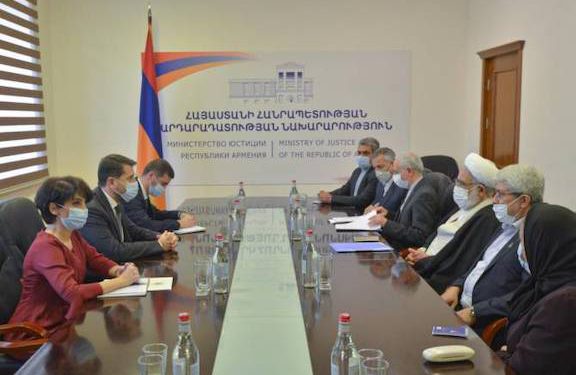 Montazeri told Prime Minister Nikol Pashinyan on Wednesday that Iran opposes the presence of terrorists in the Caucasus region, while calling for the expansion of bilateral ties with Armenia, the Mehr News Agency reported.

“We strongly oppose the provocative actions and the deployment of terrorists in the region,” Montazeri said.

Iran’s Foreign Ministry on Tuesday announced that it had proof that Azerbaijan is harboring terrorist groups along its border.

Tehran and Baku have been on a collision course since Azerbaijani forces began stopping and taxing Iranian truck drivers on the Goris-Kapan highway, during which to Iranians were arrested. Iran’s foreign ministry on Wednesday said that the truck drivers still remain in custody in Azerbaijan, but announced that two Iranians serving sentences in Baku were extradited to Iran to complete their sentences there.

Armenia announced the appointment of Arsen Avakyan as Armenia’s new ambassador to Iran, replacing Artashes Tovmasyan, who has been serving in that position since 2015. Tovmasyan was recalled by Armenia’s Foreign Ministry on October 8.

Montezari told Pashinyan that expanding cooperation and strengthening relations will benefit both countries in the long run.

To this end, Pashinyan referenced a meeting he had with Iran’s President Ebrahim Raisi last month in Tajikistan’s capital, Dushanbe, where the two leaders emphasized the expansion of cooperation between Iran and Armenia.

In terms of meeting regional challenges, Pashinyan prioritized giving a new impetus to economic cooperation between Armenia and Iran, specifically the extension of the gas for electricity barter deal, completing construction of a third high-voltage transmission line, the implementation of Meghri hydroelectric power plant project and the full use of opportunities in the Meghri Free Economic Zone, nestled on the border of the two countries.

The two also discussed expanding cooperation in the legal sector.