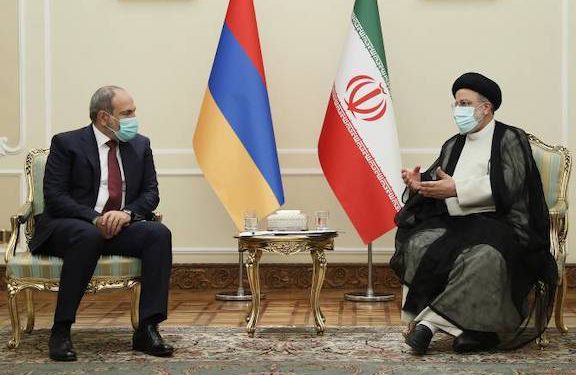 “The two governments are determined to develop bilateral and regional relations and cooperation, and we will move in this direction through cooperation,” Raisi was quoted by his office as saying during the talks.

He also said Tehran will spare no effort to promote “peace and stability” in the region.
Pashinyan was among foreign leaders who arrived in Tehran to attend Raisi’s swearing-in ceremony which was due take place in the Iranian parliament on Thursday evening.

“My presence here today testifies to our commitment to deepen relations and step up cooperation between Armenia and Iran at the highest level,” he told Raisi, according to an Armenian government statement. He reiterated his desire to “enrich the agenda” of that cooperation.

The statement said the two leaders discussed “a broad range of issues” relating to bilateral commercial ties. In particular, Pashinyan reaffirmed his government’s readiness to have Iranian companies participate in its plans to refurbish Armenian highways leading to the Islamic Republic.

The two governments set up in May a working group tasked with looking into practical aspects of such participation. The group held its first meeting in Tehran in early July and is due to meet in Yerevan later this month.

Armenian-Iranian energy projects, notably the protracted construction of a third power transmission line connecting the two countries, were also on the agenda of the talks.
“We are determined to complete joint plans and projects as soon as possible,” Raisi was reported to say.

The 60-year-old president is a former judge loyal to Iran’s Supreme Leader Ayatollah Ali Khamenei and subject to U.S. sanctions imposed for alleged human rights abuses. He has pledged to take measures to rid the Islamic Republic of the “tyrannical” sanctions.

Pashinyan said in May that relations with Iran are of “strategic importance” to Armenia. He said the Armenian-Iranian border has been vital for his country’s national security.