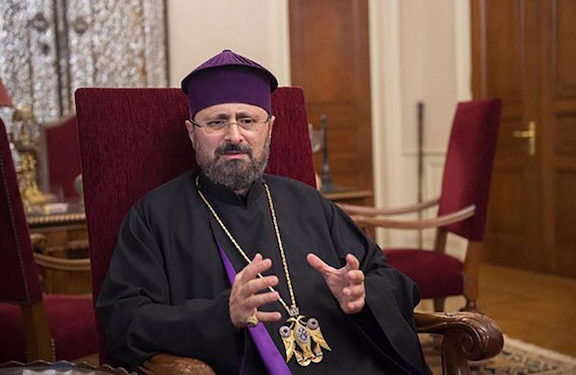 The Armenian Patriarch of Istanbul Archbishop Sahag Mashalian has called the current process to normalize relations between Turkey and Armenia “valuable,” saying it will benefit both sides both economically and culturally.

“We must accept that all steps that will strengthen relations of neighboring countries, which share a deep history both in investment and cultural terms, are valuable,” Mashalian told Hurriyet Daily News.

“It’s also important for Istanbul-Armenians that relations become better day-by-day so that both communities will know one another, will work together, make investments and that the rich cultural values on this direction will find common grounds with each other,” Mashalian added.

Hurriyet also interviewed other Istanbul-Armenian community leaders, presumably to suggest a groundswell of support for the process, which is in its third iteration in the past 30 years.

After months of hinting at a process, special envoys from Armenia and Turkey held initial talks on January 14 in Moscow to kick start this process. Both Ankara and Yerevan have said the talks were constructive.

Airlines from Armenia and Turkey are scheduled to begin charter flights between Yerevan and Istanbul on February 2—a step that was taken before normalization talks began.

“The launch of flights has given me optimism,” Yetvart Danzikyan, the editor of the Agos daily newspaper told Hurriyet. “The borders must open, the diplomatic relations must also be improved, this should be the first step. The relations must further expand.”

Professor Toros Alcan, a representative of minority communities also believes that the current process will is positive.

“I consider it a positive but a belated step. It makes a lot of sense that the language of friendship is returning. I hope peace will come back. A door of a new friendship without wars will open,” said Alcan.