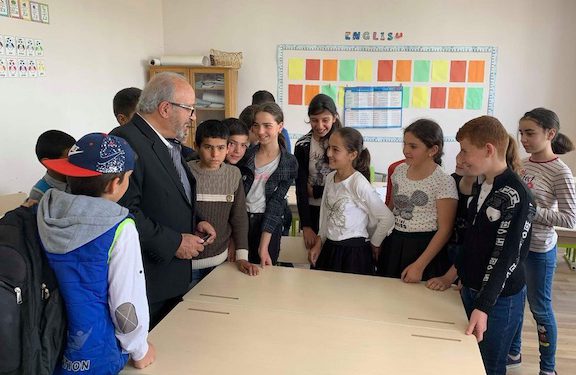 Philanthropist Jack (Hagop) Youredjian of Los Angeles has committed to supporting thousands of rural youths living in village communities supported by Children of Armenia Fund. Jack and his wife Zarig Youredjian founded the Scholarship Fund for COAF after their most recent trip to Armenia in 2019, realizing the pressing need to give Armenia’s rural youth access to higher education.

The sizable fund has already awarded scholarships in its inaugural year to 102 students from COAF beneficiary villages who are currently enrolled at universities. The number of scholarship recipients will dramatically increase each year due to the Youredjian family’s commitment to continuously replenish their Scholarship Fund.

Jack Youredjian was born and raised in Jerusalem, where he graduated from St. Tarkmanchatz Armenian School. He went on to study at the American University of Beirut, earned his doctorate in pharmacy from the University of Southern California, and founded Western Drug Medical Supply in Los Angeles in 1977. Jack credits the Gulbenkian Foundation for making it possible for him to pursue his education thanks to their scholarships. He works closely with several nonprofit organizations, and has served on numerous Boards of Directors, including COAF. He and his wife Zarig received COAF’s 2019 Humanitarian Award in recognition of their charitable work. The scholarship fund is only one of several initiatives undertaken by the Youredjian family in providing opportunities for underserved communities in Armenia and worldwide.t