Journey to Restore a Historic Armenian Map During the Pandemic 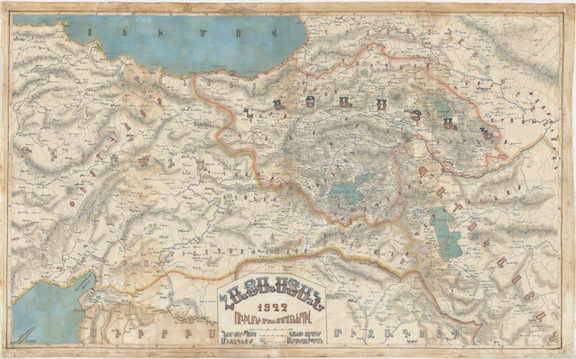 BY GEORGE AGHJAYAN
From the Armenian Weekly

For years, every time I was in the fourth floor conference room in the Hairenik building in Watertown, Massachusetts, I would stare at a huge map on the back wall. The 5’ x 8’ map was hand-drawn by Mardiros Kheranian in 1922. Those of us fortunate to have seen this map could not help but be drawn to it and be transported to the many Armenian villages it identified. Kheranian’s map is even more of a cultural and artistic treasure in a world where the Turkish government has attempted to wipe the names of these villages from modern maps.

Kheranian was born in the region of Van and lived most of his life in Aykestan, a neighborhood just outside the city walls of Van. He was a cartographer and teacher at the famed Armenian monastery of Varakavank. He participated in the defense of Van in 1915 and, after the fall of Van in 1918, he fled south and took refuge in Syria, where he continued to create maps of Armenia. Others in his family fled to Yerevan, to France and to the US.

We do not know the exact number of maps he produced during those years, but several others are accounted for. These include a 37 x 56 inch map of the defense of Van city which is displayed at the National Museum in Yerevan and reproduced in “The Armenian Highland: Western Armenia and the First Armenian Republic of 1918,” a book written 97 years later by his great-nephew Matthew Karanian. At least three other maps of Van are accounted for and in private hands in California, according to Karanian’s research.

Kheranian’s other maps of historic Armenia that are known to have survived the Genocide are held by the Armenian Apostolic Church in Echmiadzin, the Detroit Azadamart Gomideh of the Armenian Revolutionary Federation, the ARF Museum in Yerevan and members of Kheranian’s family. Each of these maps is large format. The version held by Kheranian’s descendants was created in 1928 and measures 42 x 66 inches. The Hairenik map is the oldest and largest of those known to exist.

Over the years, I had taken many images of the map with my camera, none of which were satisfactory. The condition of the map, its large size and the glare from the protective glass covering it made it difficult to photograph. At some point in its history, the map had sustained water damage. In addition, the cloth map had been stretched and stapled to a piece of plywood, which wasn’t ideal from a preservation perspective.

At the beginning of last year, I contacted Levon Avdoyan, the now-retired Armenian specialist at the Library of Congress to seek his advice on conserving the map. He suggested I reach out to the Harvard Map Library.

Through the Harvard Map Library, I was put in contact with Louise Baptiste of Paper Conservator. On the eve of the pandemic, we were able to meet at the Hairenik and discuss restoring the map. The objective was to restore the damaged portions, clean the map of all harmful chemicals accumulated over the years and make a high-resolution archival quality scan of the map. Louise recognized the importance of the map and enthusiastically took on the project.

When the day came to take the map out of the frame and roll it up for transport, I was nervous. Louise delicately removed the staples and placed the map between the necessary sheets and specifically designed roll to ensure its safe-keeping. For the first time in a long time, the map left the Hairenik building.

Over the past year, Louise painstakingly restored the map to its original grandeur. Along the way, she shared images and videos of the work being done on the map. The process was complex. She made special screens to allow for vacuuming the map without causing damage. In addition, she had to find the right mix of chemicals to clean the map without removing the original ink. A year later, the map, now restored, was brought to the Harvard Map Library for scanning.

1. VIEW GALLERY: A rendered image of the Kirk Kerkorian School of Medicine at UNLV

2. The soon to be five-story Kirk Kerkorian School of Medicine building currently under construction

Robert Zinck, a photographer for the Digital Imaging and Photography Services department of Widener Library at Harvard University, used a 100 megapixel camera (one of the highest resolution cameras on the market today) to take eight separate images of the map. The map’s size required this many images in order to maintain the desired resolution. There are then two ways to join these images to recreate the map in its entirety. The preferred way is to “stitch” them together so that the resulting full image is seamless to the viewer, without any misalignment, distortion or tone/color difference between sections. If this was not possible, then the images would have to be tiled. Stitching is most easily done with material (such as paper) that can remain flat and stable. With linen there is the possibility of the fabric stretching or misaligning between scans. We were very fortunate that with our map, stitching proved possible and the results are phenomenal!

The map has now been returned to the Hairenik, awaiting the new frame that will protect and preserve it. The entire project was made possible by grants from the Armenian Cultural Association of America (ACAA) and the Armenian Communities Department of the Calouste Gulbenkian Foundation. The digitized map will be made freely available through Houshamadyan: A project to reconstruct Ottoman Armenian town and village life.