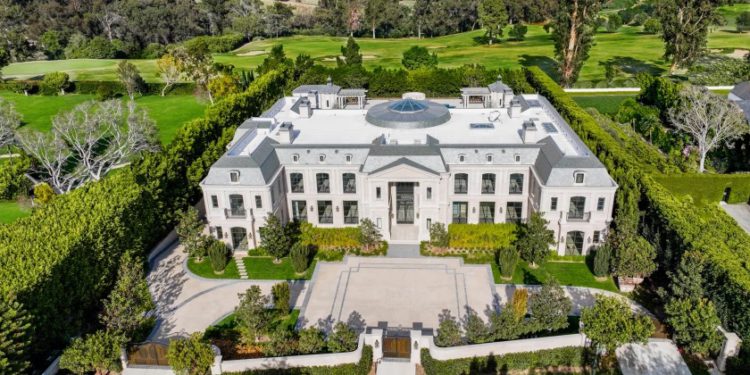 This $63 million mansion in L.A. is owned by Armenia's ex-finance minister Gagik Khachatryan

The Justice Department announced Thursday that it is seeking to seize a more than 30,000-square-foot mega-mansion in the Holmby Hills neighborhood of Los Angeles, pursuant to a civil forfeiture complaint filed that alleges that the mansion was purchased with bribes paid by an Armenian businessman to the family of Gagik Khachatryan, a former high-ranking Armenian public official.

Khachatryan, 66, was appointed Armenia’s Finance Minister in 2014 by former president Serzh Sarkisian, although his involvement in Armenia’s customs and internal revenue department dates back to 2000 when Robert Kocharian was president.

Khachatryan became known as the “Super Minister,” because of his significant responsibilities, served as Chairman of the State Revenue Committee of the Republic of Armenia from 2008 to 2014 and as Minister of Finance of Armenia from 2014 to 2016.

In the complaint, which was filed Monday in U.S. District Court for the Central District of California, the United States alleges that businessman Sedrak Arustamyan paid Khachatryan and his family more than $20 million in bribes in exchange for favorable tax treatment of his businesses.

The bribe payments allegedly were used to purchase the Holmby Hills property, which had been recently listed for sale for $63,500,000, said the Justice Department.

Gagik Khachatryan and his sons are charged in Armenia with receiving bribes in violation of the criminal code of the Republic of Armenia. Criminal charges are also pending in Armenia against Arustamyan for paying bribes.

“This matter was investigated by the FBI’s Eurasian Organized Crime Task Force (EOCTF) and the U.S. Marshals Service. The Republic of Armenia’s Prosecutor General’s Office and National Security Service provided critical assistance,” said the Justice Department in its statement.

The Los Angeles Times reported on Friday that Khachatryan and his sons used the $20 million “loan” from Arustamuan to form multiple entities “to receive, disguise and conceal illegal bribe payments” as well as their purchase of the Holmby Hills property.

Soon after buying the home, which was previously owned by a Lions Gate Entertainment executive, the Khachatryan razed the property and hired the high-coveted architect Richard Landry to design the mansion, the L.A. Times reported.

“Plans called for an elaborate compound, including rooms for Khachatryan, his two sons and his daughter, along with servants’ quarters, a wine cellar and a two-story library, according to court filings,” reported the L.A. Times. “Construction began in 2015, and although the home’s French-Normandy exterior was completed, along with gardens, a pool and spa, the interior is incomplete.”

Khachatryan left his post in 2016 when the alleged bribery scheme came to light. He was charged with abused of power and embezzlement in 2019. His sons, who have since fled Armenia, were charged in 2020.