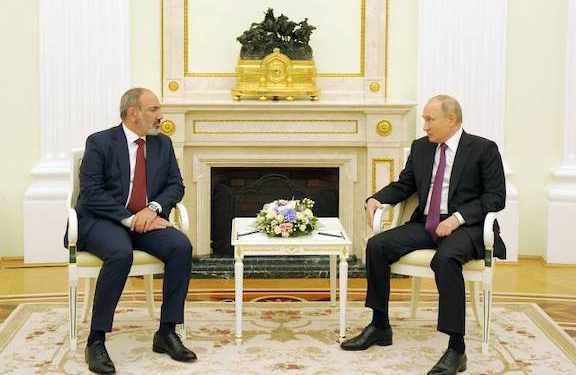 An Armenian government statement said they discussed “ongoing developments” in and around the conflict zone, efforts to shore up stability in the region and the implementation of Russian-brokered agreements to establish transport links between Armenia and Azerbaijan. Russian-Armenian relations were also on the agenda, added the statement.

Neither the government nor the Kremlin announced any agreements reached by the two leaders.

“We will talk in a formal and informal setting — have lunch together, discuss current affairs, talk about prospects,” Putin told Pashinyan in his opening remarks at what was their fourth meeting in less than a year. He said they will talk about a short-term and long-term “settlement in the region.”

“Unfortunately, we still cannot speak of a full stabilization of the situation in our region,” Pashinyan said for his part. He stressed that Russia continues to play the “key role” in international efforts to resolve the Karabakh conflict.

The Armenian Defense Ministry said they discussed Russian-Armenian military ties, the situation on the Armenian-Azerbaijani border and “a number of issues relating to regional security.” It did not elaborate.
The Russian Defense Ministry issued no statements on Shoigu’s latest talks with Karapetyan.

Putin also said on Tuesday that he wants to “compare notes” with Pashinyan with regard to next month’s summit of ex-Soviet states, including Armenia, Azerbaijan and Russia. The leaders of all three countries are expected to attend it.

Both Pashinyan and Azerbaijan’s President Ilham Aliyev expressed readiness earlier this month to meet with each other. Their most recent face-to-face meeting was hosted by Putin in Moscow in January.