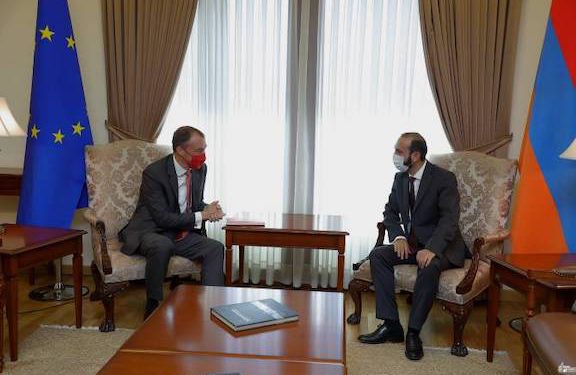 Regional security and a settlement of the Karabakh conflict were topics of discussion on Monday, when the European Union’s special representative for the South Caucasus Toivo Klaar and his delegation met with Armenia’s Foreign Minister Ararat Mirzoyan.

In addition to pressing for the release of Armenian prisoners of war being held captive by Azerbaijan and the need for a comprehensive settlement of the Karabakh conflict, Mirzoyan addressed the illegal encroachment of Azerbaijani forces in Armenia’s sovereign territory, as well as a recently held joint military drills on the borders of Artsakh by Turkey and Azerbaijan.

Klaar reaffirmed the EU’s political commitment to provide support to Armenia during his meeting with Prime Minister Nikol Pashinyan, with whom fulfilling provisions of the EU-Armenia partnership agreement was also discussed.