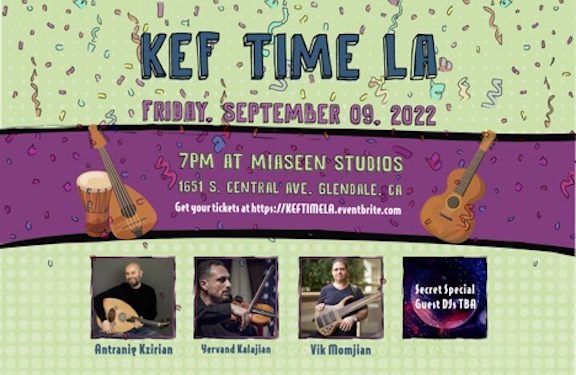 GLENDALE—“Kef Time L.A.” will be a special evening of Armenian folk music and line dancing set to take place on September 9, hosted at Miaseen Studios. The event will kick-off at 7 p.m. at 1651 S Central Avenue, Glendale, CA 91204.

Timeless folk favorites such as the Tamzara, Pompouri, Haleh, Sepo Bar and various other favorites will be performed live by a master cast of musicians featuring oud, violin, bass and dumbeg percussion. Dancers and enthusiasts can enjoy these cherished folk songs and dance the night away in a welcoming space for what will surely be a magical night.

“We have been looking to host this event for quite some time,” stated oud player Antranig Kzirian. “With the last couple years of difficulties and what everyone experienced, we are quite excited to bring the community together for a night of fraternalism, dancing and appreciation of our beloved folk music tradition,” he added.

Kzirian will perform on the oud and vocals. A co-founder of the acclaimed kef music group the Aravod Ensemble, Kzirian is no stranger to the kef tradition and has performed on the oud and guitar for over 25 years at countless community social events for various organizations, festivals, private functions and folk and classical concerts, in addition to studying the Armenian American oud tradition academically at Columbia University. As the symbolic plucked fretless string instrument of Armenian folk music, the oud holds a special place in the Armenian culture. Given this role of the oud, Kzirian has studied or performed with oud masters such as John Berberian, Ara Dinkjian, Richard Hagopian, the late John Bilezikjian and various other respected interpreters of this sacred craft, in addition to recently accompanying the famed Armenian vocalist star Onnik Dinkjian here in Los Angeles. Kzirian has also been an innovator on the oud, co-founding the art folk ensemble String Harmonies, and introducing the oud to rock with his band Viza.

Vik Momjian is a master of the 4, 5 and 6-string fretted and fretless electric basses, and is the leading bass player in his field. As a Lebanese born Armenian American that has backed up the top Persian, Armenian, Arabic, Assyrian, Greek and Kurdish artists, Momjian has encyclopedic knowledge of various cultures’ music. Recent projects include working with the living legend Enrico Macias, String Harmonies and various other projects. Momjian’s work has been featured in Bass Player Magazine, Bass Musician Magazine, and No Treble, and Momjian is endorsed by La Bella, MTD Bass, Moollon, Ibanez, Asterope, Gallien-Krueger, Bartolini, Forder, Peterson Tuners and Bergantino. Momjian has studied with prominent instructors Jim Lacefield, Steve Bailey, and John Pena, and is without a doubt the first-call musician for many top Middle Eastern and ethno-European artists.

Yervand Kalajian is a world class violinist known for his creative soloing and enchanting playing style. Kalajian performed with the Los Angeles youth philharmonic from 1986 to 2009, reaching the prestigious positions of assistant concert master and concert master. Kalajian is a first call violinist in Southern California in a wide variety of styles, including Armenian folk, classical, pop in addition to film and television soundtrack work with famed composer John Debney for the movies Beirut and the Stoning of Soraya M. Kalajian also lended his mastery working with composer Aaron Zigman for Sex and the City 2 and The Company Men, and also recorded his violin on Viza’s “Aria” record with the art folk ensemble String Harmonies. Kalajian has accompanied numerous Armenian and Middle Eastern singers and artists, including Harout Pamboukjian, Paul Baghdadlian, Yeghia Sanosian, Harout Khachoyan, the Black Cats, Ibrahim Tatlises and Muazzez Ersoy.

Aram Malkhassian rounds out the group on percussion. The 26-year-old Lebanese/Armenian drummer studied music and drums at Hamazkayin’s Parsegh Ganatchian Music School in Beirut, and has worked as a professional freelance touring and session drummer since 2014 with notable singers, performers and producers in the Middle East such as Melhem Zein, Ramy Ayach, Maya Diab, Carole Samaha, Adam, Jose Fernandez, Guy Manoukian, Sarina Cross and many others. Malkhassian also served as the main Drummer for “Heik men ghanni” Season 6-TV show on MTV Lebanon, and also plays the piano.

2 Soldiers Killed, 14 Injured as Azerbaijan Ramps Up Attack on Artsakh