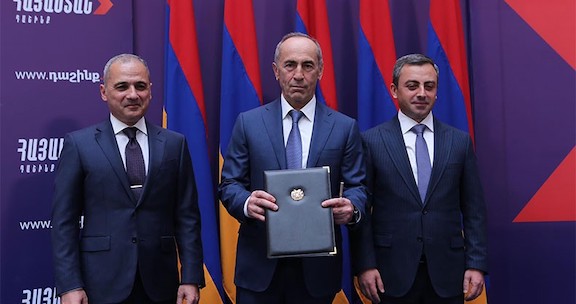 An election alliance headed by Armenia’s former president Robert Kocharian and including the Armenian Revolutionary Federation and the newly-established “Reborn Armenia” Party kicked off its campaign on Sunday with an official ceremony where a declaration was signed between the parties. The event was followed by a rally at Yerevan’s Freedom Square where thousands of supporters cheered on the alliance, which hopes to garner seats during the upcoming June snap elections in Armenia.

The political alliance held its first public event at Yerevan’s Grand Hotel, where Kocharian explained the genesis of the alliance with the ARF and the Reborn Armenia parties.

“Forces and people that have enough experience are needed to confront these crisis,” explained Kocharian, who said he possessed vast experience in governing in crisis, has amassed experience and knowledge within the defense-security infrastructure, as well as history in overcoming economic crises.

Kocharian explained that he chose the ARF because the it is the party that has fought for preserving the Armenian identity around the world.

“This is the party [the ARF], with which I have a long experience of cooperation. The ARF has been part of the government when I was president, even when a coalition was not formed. This experience had beneficial results and all of you have witnessed those results,” said Kocharian.

In discussing the newly-formed Reborn Armenia party, which was founded by a group of Syunik Province residents, Kocharian said “Syunik is at the epicenter of the threats.”

“Whether we remain an active entity in the region or will become follower depends on Syunik,” said Kocharian. “There are real dangers facing Syunik and today Syunik is the symbol of our struggle.”

ARF Supreme Council of Armenia chairman Ishkhan Saghatelyan said that the campaign the party began six months ago must come to its victorious fruition with the removal of the current authorities.

Saghatelyan emphasized that the upcoming elections are not regular election. “They are the most consequential elections of our life and are detrimental because they will determine whether we have a country or not,” said Saghatelyan.

The chairman of the Reborn Armenia Party, Vahe Hakopyan, discussed the issues facing Syunik, adding that the security issues of Armenia and Artsakh begin in the province but don’t end there.

Following the presentations, Kocharian, Saghatelyan and Hakobyan signed the cooperation declaration of the political alliance. The three leaders and their supporters began walking toward Freedom Square where thousands had gathered for the “Armenia Alliance’s” first rally, which coincided with the 29th anniversary of the liberation of Shushi.

“Today, from this stage, we are counting down the days whether the government that surrendered Shushi should remain the leaders,” Kocharian said to the thousands of supporters who turned out for the rally. He urged them to start the countdown on social media every day. “This must become the growing anticipation for the entire republic.”

“Today is Shushi liberation day, however today the symbol of our victory, Shushi, is being occupied,” said Saghatelyan when took the stage for the rally.

“Today you are here alongside the winners of Armenia—with people who have won victories,” said Saghatelyan. “We are going to bring new victories for Armenia. We have come to secure national dignity in Armenia, to secure development and social justice, to bring together the potential of Armenia, the Diaspora and the all Armenians for the future of the Armenian people.”