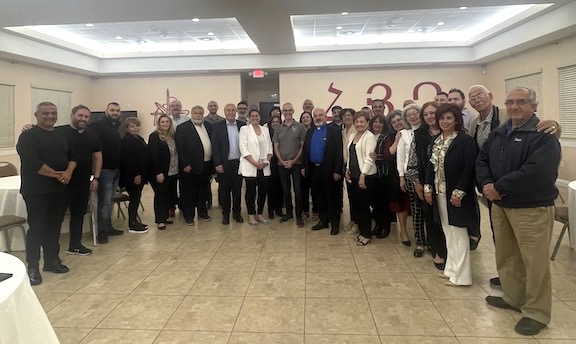 L.A. City Councilmember Mitch O'Farrell (center) meets with leaders of the Hollywood Armenian community on May 10

Los Angeles City Councilmember Mitch O’Farrell on Tuesday met with the leaders of Hollywood Armenian community organizations and institutions during a gathering at the ACF Hollywood Youth Center.

The occasion was an annual briefing organized by the Armenian Revolutionary Federation Karekin Njdeh chapter where all organizations provide an update on their activities and discuss ways to coordinate service to the community and advance issues of interest.

It was the first time since the pandemic that the gathering was being held and the community leaders welcomed O’Farrell and heard a briefing about the many projects his office has undertaken, especially efforts to ensure safety of residents in Council District 13 during Covid 19 and tackling the homeless crisis.

O’Farrell met with the Board of Trustees of the St. Garabed Armenian Church and Archpriest Vicken Vassilian; the Armenian Relief Society Mayr chapter executive; the Los Angeles Homenetmen chapter executive; the ARF-D Karekin Njdeh chapter board; the chairman and members of the Armenian National Committee of America Hollywood chapter; Maral Tavitian, Principal of the Rose and Alex Pillbos Armenian School, the chairman of whose board Vahe Tashjian was also present, Christine Movsesian, the Director of the ARS Postoyan Pre-School; and the Editor of Asbarez, Ara Khachatourian, who interviewed the councilmember last week. O’Farrell was accompanied by his Field Deputy, George Hakopiants.

These organizations constitute the core of community activities in Little Armenia and function in the school-church-community center compound between Alexandria and Kenmore streets, with Asbarez operating from its headquarters on Vermont Avenue.

After meeting each participant individually, O’Farrell made remarks, briefing the community leaders about his office’s efforts to address the Covid 19 pandemic and some of the services his office and the city council continue to provide as relief measures for the public.

He also announced that the long-awaited and much-anticipated Gateway to Little Armenia is in its final stages of construction, with completion slated before the end of the calendar year. He said that once this structure, which is partially constructed from Tufa stone imported from Armenia, a large unveiling event will be held at its site, located at the corner of Hollywood Boulevard and the 101 Freeway exit.

O’Farrell also spoke about the importance of the upcoming June 7 Primary Elections and his campaign for re-election, emphasizing that the stakes in the city are high and residents and constituents need the experience that he brings having served as a member of the L.A. City Council for the past nine years. The ANCA-Western Region has endorsed O’Farrell in his re-election bid.

During a brief question and answer session, O’Farrell heard concerns from Principal Tavitian and Director Movsesian about the ongoing homeless crisis around the school campus and called on the city councilmember to address this issue, which has become an impediment, especially when the school was closed during the pandemic.

“It was very important for the leaders of the Hollywood community to be able to address their concerns directly to Councilmember O’Farrell. We thank him for visiting our center and continuing to be an advocate for the issues important to our community in the LA City Council,” said Suren Seropian, the chair of the ANCA Hollywood chapter.

During the community briefing session, Zohrab Mahdesian, the chairman of the ARF-D Karekin Njdeh chapter informed all participants, who use the ACF Youth Center facilities, about the steps his executive board has taken to enhance security in and around the compound.

Each organizational representative provided a briefing of their respective activities. It was Archpriest Vassilian, who in his remarks, praised each organization and their members for coming together to confront the challenges facing the community and rallied together to provide assistance to Armenia, Artsakh, Lebanon and the local community. He emphasized the need to continue working as one large family to leverage the capabilities of each organization and institution in service of the community and the Armenian Nation.