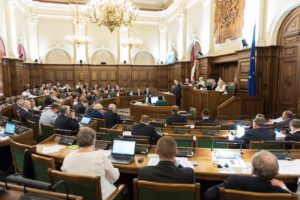 The parliament of Latvia recognized the Armenian Genocide

The Parliament of Latvia, known as the Seima, officially recognized and condemned the Armenian Genocide, adopting a declaration on Thursday with a vote of 58 to 11 with seven abstentions, Armenia’s outgoing Ambassador to Latvia Tigran Mkrtchyan announced.

On April 24, 2020, members of two parties in the Latvian parliament, the ruling New Conservatives and the Yes to Development Parties, made statements condemning the Armenian Genocide. On the initiative of these groups, as well as most of the representatives of the Agreement party, the process of recognizing the Armenian Genocide began in February, as a result of which a resolution-statement was submitted on April 23.

“Emphasizing that Latvia condemns all crimes against humanity, the declaration notes that the country sees it as a duty to recognize and remember these crimes in order to prevent their recurrence,” reads the text of the resolution.

“Recognizing that a large number of Armenians were deported to other parts of the empire as a result of the actions of the Ottoman authorities, which resulted in many casualties caused by starvation, atrocities and massacres, the lawmakers condemn the crimes, massacres and forced deportations committed by the Ottoman authorities against the Armenian people,” added the resolution.

“The declaration respects the memory of all the victims of the Armenian Genocide, pays tribute to all the survivors, affirms that open discussions on historical issues are inextricably linked to the development of a healthy, mature democracy,” said the resolution

The Seima called on the international community “to assess these historic events, to look to the future we want to build, without violence, intolerance, a future where human rights are respected, where everyone can be free, safe and secure.”

Armenia welcomed the passage of the resolution by the Latvian Seima, saying it adds to efforts toward the international recognition and condemnation of the Armenian Genocide.

In a statement, Armenia’s Foreign Ministry said that the declaration is important not only for the advancement of historical justice and truth, but also for the prevention of similar crimes in the future.

“The universal recognition of the Armenian Genocide is one of the most important guarantees for the security of the Armenian people in the region,” said the foreign ministry.

“We share the position of the Latvian Parliament that the recognition of such crimes is needed to build a future where human rights are respected, and every individual’s freedom, safety and security is guaranteed,” the foreign ministry statement said.

Ankara was quick to condemn the Latvian Parliament saying the “recognition of the 1915 events as genocide is a futile attempt to rewrite history with political motives.”

“We reject and strongly condemn this unfortunate and unlawful decision. Parliaments are not venues for history writing and judgment,” said Turkey’s foreign ministry in a statement issued on Thursday.

“Instead of serving the agenda of some circles that try to create historic enmity, we invite the Latvian Parliament to take back this wrong step and to support the efforts to establish a practice of peaceful coexistence in the region, especially between the Turkish and Armenian peoples,” the Ministry stated.