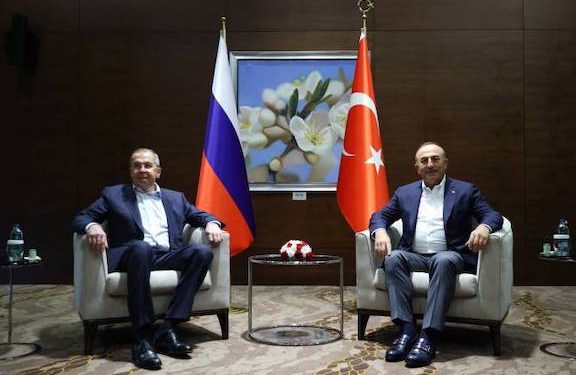 Russia’s Foreign Minister Sergei Lavrov justified a visit by Turkey’s President Recep Tayyip Erdogan to Artsakh’s Shushi last month saying it was within the context of a partnership between Ankara and Baku.

“As far as Erdogan’s visit to Azerbaijan is concerned, it was in the context of the relations between Turkey and Azerbaijan,” Lavrov said during a press conference Wednesday with his Turkish counterpart Mevlut Cavusoglu in Antalya, Turkey.

“Today Cavusoglu and I agreed that the both of us will use our resources to contribute to the reconciliation between Armenia and Azerbaijan and the normalization of relations and to help the Armenians, Azerbaijanis and people of other nationalities to live as good neighbors,” added Lavrov, who said Moscow supported a scheme concocted by Erdogan and Azerbaijan’s President Ilham Aliyev to promote development in the region.

“Russia supports Erdogan’s and Aliyev’s proposal to create the “three plus three” mechanism for promoting the development of the region, including the three countries of Transcaucasia and the three neighbors — Russia, Turkey and Iran,” said Lavrov, praising Moscow-Ankara relations, which he signaled were enhance through the operation of a Turkish-Russian monitoring center that was established this spring in Aghdam, on the outskirts of Artsakh.

“We are satisfied with how the Russian-Turkish monitoring center is operating in the Agdam region of Azerbaijan. We exchanged views on the specific situation there. We are certain that the unblocking of transport links and the efforts to boost multilateral economic cooperation in Transcaucasia with neighbors, including with the participation of Turkey and Russia will serve for comprehensive stabilization of the situation,” emphasized Lavrov saying he was satisfied with the “close and effective cooperation” between Ankara and Moscow over Karabakh.