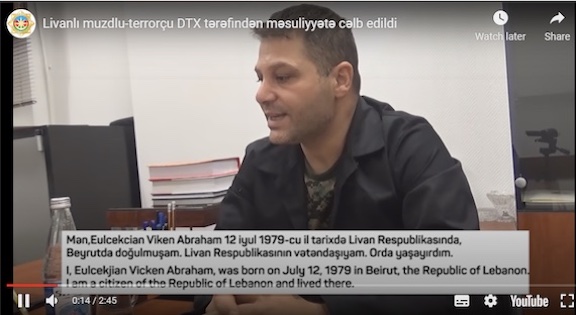 BY MARIANA MATEOSSIAN
Special to Asbarez

Viken Euljekjian, an Armenian from Lebanon, who was captured by Azerbaijani forces on November 10 near Shushi and is being held illegally by Azerbaijan was transferred to a hospital.

This was reported by Eulkekjian’s 18-year-old daughter, Christine, and mother, Beatrice, who have spoken from Beirut about their latest telephone conversation with Vicken, as he was transferred from prison to hospital.

Christine Euljekjian has had to grow fast in the last six months. She speaks with composure and maturity and has become the voice of an Armenian family longing for the return of a son, a brother and a father whose only crime was to dream of a better future in Armenia.

Due to the difficult economic and political climate in Beirut, Vicken considered emigrating to Armenia and applied for the citizenship of the Republic of Armenia in 2017, while retaining his Lebanese citizenship by birth. Vicken moved permanently to Yerevan in November 2019 with the intention of starting a business. He eventually bought a car and worked as a driver, taking tourists and visitors on tours. Alongside hundreds of Armenian families from Lebanon, he was vowed accommodation in the town of Shushi in Nagorno Karabakh by the Diaspora High Commission. Christine told us her father had made enquiries to find suitable education and employment opportunities for his two children and the plan was for them to join him once he had settled in.

These dreams were shattered when the war against Artsakh was launched unexpectedly by Azerbaijan. Unaware that the city had already been taken over, Vicken was captured the day after the ceasefire agreement near Shushi. On 10 November 2020, with Maral Najarian, Vicken drove to Shushi in Nagorno Karabakh, to collect his belongings from his Shushi hotel before the handover of the town to Azerbaijan. They were stopped by Azeri forces and transferred to Baku in a bus with many other Armenian captives, civilians and soldiers. Maral Najarian was released in March 2021, whereas Vicken remains in captivity, where he is facing criminal charges by Azerbaijan.

Representatives of the International Red Cross were permitted to visit Vicken in prison only in February 2021. ICRC has facilitated sporadic communication between him and his family in Beirut, exchange of letters and notes. In April, Vicken was allowed to telephone his family for the first time in five months. He told them he was treated well, and that his paperwork was being dealt with for his release in three months.

These hopes were once again crushed, when on May 5, weeks after these much anticipated phone calls, Azerbaijan’s State Security Service announced that Vicken Euljekjian’s investigation was completed and that his case was sent to court. He is being charged under Article 114.3 (participation of a mercenary in a military conflict or military operation), Article 214.2.1 (terrorism committed by a group of persons, an organized group or a criminal organization) and Article 318.2 (illegal crossing of the state border of the Republic of Azerbaijan). However, the European Court of Human Rights has not been notified of his case so far.

“Armenia has never used mercenaries or terrorists, quite the opposite, it was Azerbaijan that deployed over 2000 foreign fighters in the Artsakh war,” stated Hovhannes Aleksanyan from the office Armenia’s High Commissioner for Diaspora Affairs. “By charging Armenian nationals as foreign mercenaries, Azerbaijan’s government is attempting to counterweight with those foreign mercenaries, who fought in the last Artsakh war, two of whom are currently in custody in Armenia.”

Vicken Euljekjian has been an Armenian national for several years, residing of Armenia before the start of the last war. He was in Artsakh for four to five days and returned to Yerevan around October 10 and was staying with Maral and Annie Najarian in Yerevan until November 10. Little did he know, that his unplanned trip back to Artsakh November 10, to pick up his suitcases left at his Shushi hotel before the war, would shatter his life for the third time.

Asked about the latest update from him, Vicken’s daughter Christine confirmed that the family had spoken with him on May 25. Vicken had phoned his mother, his two children from a hospital in Azerbaijan, where he had been taken by Red Cross officials. Vicken told his family he was being treated for back pain. The conversation had been very brief and they were unable to ask many questions. Vicken had also called his mother, Beatrice, on the same day, and mother and son had spent most of the time crying. Beatrice Euljekjian says her son’s mental health has greatly deteriorated. She is also extremely concerned about his physical health and the true reasons behind his hospital admission.

When asked if they had any message to the Azerbaijani authorities, both Beatrice and Christine appealed for Vicken’s release and quick return to his loving family. “He has suffered too much already,” they concluded.

Despite her sorrow and the gravity of her father’s situation, the expression in Christine’s beautiful eyes is one of hope. She is determined to communicate and inform everyone about her father’s innocence until someone, somewhere will help him come back to his family.

Mariana Mateossian is a member of the British Armenian Humanitarian Group. The organization is working to highlight the humanitarian plight of Armenians in the recent conflict and have initiated a petition on change.org and urges all to sign and share it to advance the freedom of Euljekjian and ALL Armenian POWs.

Macron Again Calls on Baku to Pull Out of Armenia