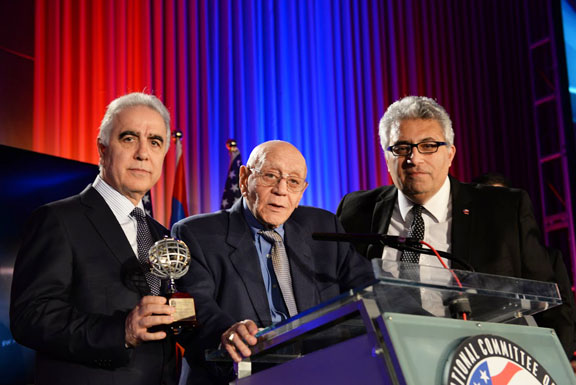 According to SI.com, Tarkanian was taken to Valley Hospital Medical Center by ambulance on Monday, after being unresponsive when doctors attempted to get his blood pressure elevated. It was reported on Tuesday that Tarkanian was in critical condition, battling an undisclosed type of infection


Tarkanian was hospitalized last November after being treated for pneumonia. In April 2014, he had spent over a week in the hospital after having a second heart attack.

Tarkanian boasted a 761-202 record in 30 seasons as a college basketball head coach with Long Beach State, University of Nevada, Las Begas (UNLV), and Fresno State. He retired in 2002.

Tarkanian coached his teams to 18 NCAA tournament appearances and four Final Fours. He led the UNLV Rebels to the NCAA championship in 1990.

In November 2013, The Armenian National Committee of America-Western Region honored Tarkanian with its “People’s Champion” Award.

In introducing Tarkanian, ANCA-WR Board member Steve Artinian recounted the life and legacy of the famous and revered coach, who had taken his UNLV teams to four Final Four Regional Championships, as well as a NCAA Division I Men’s Basketball Championship. Many of the attendees, both young and old, grew up watching Tarkanian on National TV as he led his teams to various victories.

In what was likely the night’s most emotional acceptance speech, Tarkanian thanked the ANCA and his fellow Armenian people for recognizing him with the esteemed honor.

Tarkanian’s acceptance speech during his Basketball Hall of Fame Induction in September 2013 garnered even more widespread support for the coach, who reminded the world of the life of struggle his immigrant Armenian parents endured, both of whom fled their homeland on horseback with nothing but the clothes on their back escaping the Armenian Genocide.

Ankara Says Armenia ‘Content’ with Normalization of Ties with Turkey