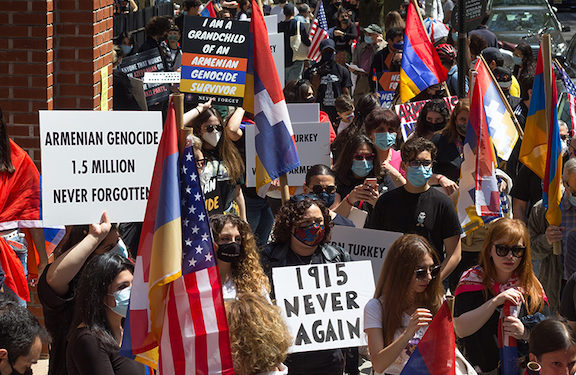 BY ROXANNE MAKASDJIAN
From Berkeley News

It’s 1968 and near the end of April. A feeling of sheer joy comes over me as I do barrel rolls down the hill where the new Armenian Genocide monument was being consecrated in Montebello, Calif. I’m 6 years old, oblivious to the meaning of the day, feeling like I had hit the jackpot — a smooth, grassy hill of just the right incline to allow for an exciting speed without fear of injury.

Coasting blissfully downhill, I was not yet aware of the painful, formidable history that had brought these thousands of Armenians to that hill on that day and on every Armenian Genocide commemoration day thereafter. But it didn’t take long to learn that all four of my grandparents were among the few survivors of the genocide perpetrated by the Turkish leadership of the Ottoman Empire in 1915, wiping out the Armenian civilization living on its historic homeland, and expropriating all their personal and community properties.

And as I grew into adulthood, I learned that the pain and damage of the genocide had not diminished over time; it had instead increased with every generation. With no recognition and no reparations to recover as a people, the genocide was still an open wound. Successive Turkish governments have carried out an increasingly elaborate and extensive campaign of denial that extends far beyond the country’s own boundaries and across the world.

Adding to the pain, I also learned of my own government’s complicity in this massive cover-up.

Despite the reams of evidence in our own national archives, the testimony of American ambassador to the Ottoman Empire, Henry Morgenthau, and his establishment of the Near East Foundation, which raised more than $2 billion in today’s currency to save Armenian Genocide survivors, U.S. presidents have still been bullied by Turkey into shying away from the only word that accurately describes the crime committed against the Armenians — genocide — a word whose inventor said he was moved to create after witnessing what Ottoman Turkey did to its Armenian subjects with impunity.

Changing course
Roxanne Makasdjian works in UC Berkeley’s Office of Communications and Public Affairs.
As painful as this was to me personally as an American, it caused significant damage on an international scale. As Turkey’s strongest ally, the U.S.’s complicity in Turkey’s denial has poisoned their relationship, harmed the U.S.’s standing regarding human rights and emboldened Turkey’s increasingly belligerent threats and actions against Armenians.
President Joe Biden changed course forever Saturday, joining historians and many other nations in declaring that the Ottoman Empire’s slaughter of an estimated 1.5 million Armenian civilians was genocide.

Reading Biden’s statement Saturday, I could finally breathe. After spending my entire adult life educating my fellow Americans about the Armenian Genocide and why recognition is so crucial both to our survival and to restoring America’s promise and role as a champion of human rights, this was a very welcome respite.

Not lost on me was the similar sense of relief brought by the guilty verdict in the murder of George Floyd. I had discovered my kinship with the African American community years ago as a grad student here, which found expression in the form of my journalism degree thesis, a documentary film about the San Francisco Armenian American lawyer who represented the Black Panther Party.

After grad school, I made my permanent home in the Bay Area, and acquainted myself with the small Armenian American community here. They had established numerous organizations, built churches and a school — all part of the usual course for a diaspora Armenian community hoping to maintain its culture outside its land. But one key component was still sorely missing — a site to commemorate the Armenian Genocide. In 1997, the opportunity arose to have one, and I was recruited to help make it happen.

Built in 1934, the 103-ft. concrete cross sitting atop the highest hill in San Francisco, Mt. Davidson, was threatened with removal. Several groups had sued the city of San Francisco for failing to observe the separation of church and state by having a religious symbol on public property. After much debate, including support from the neighbors of Mt. Davidson that the cross not be destroyed, the city decided to auction off the cross and its hilltop to private ownership, provided that no other structures be built on the site and that it remain open to the public.

The Armenian community rallied to win the auction. Saving the Mt. Davidson Cross from destruction would be a meaningful act by the people who were the first to adopt Christianity as a national religion in 301 A.D. and a gift of thanks to the city that gave us a new home after the genocide. Armenians won the auction and city residents voted to approve the sale, despite active opposition by Turkish representatives.

I was tasked with drafting the language on the plaque at the foot of the cross, and no sooner was it installed, than a lawsuit was filed against its placement by the Turkish consul, appealing the case all the way to the Supreme Court, which rejected the demand that the plaque be removed.

The long arm of Turkey’s genocide denial
Of course, this is just one local example of the long arm of Turkey’s genocide denial. I’ve also personally experienced it over the course of the 15 years I’ve led The Genocide Education Project, which helps high school social studies teachers incorporate the topic into their curriculum. The Turkish government has been largely successful in keeping the topic out of World History curricula, despite the fact that it was the most significant humanitarian crisis during World War I and considered the prototype for modern-era genocide.

And ever since Armenia gained independence in 1990, the State Department has refused to allow its ambassador there to acknowledge the Armenian Genocide. But, as a former historian, Ambassador John Evans decided to break the rule. On a visit to UC Berkeley in 2005, he publicly recognized the Armenian Genocide. I was there at Alumni House and rushed home to write about it. I think Evans and I both were hoping his statement would encourage the government to follow suit. Instead, within a short time, Evans was fired. He later wrote a book about it.

These are only small examples of Turkey’s widespread, well-funded denial campaign. Its longtime gag-order of its strongest ally, the U.S., demanding that it comply with Turkey’s denial of the Armenian Genocide, has not only poisoned the relationship between the two countries, but has given Turkey a free pass on accountability for the genocide and its frequent threats against the Republic of Armenia, the small part of Armenia outside of the Ottoman Empire, which gained independence from the U.S.S.R in 1990. The very unstable relations between the new neighbors, Turkey and Armenia, are a direct result of Turkey’s continued denial of the genocide. Just this past fall, Turkey joined with its ethnic ally, Azerbaijan, in a devastating attack on the Armenian region of Artsakh. Both countries’ leaders made genocidal threats throughout the war and after. Their followers here in the Bay Area attacked the Armenian Cultural Center, which housed The Genocide Education Project and other community organizations, destroying it with an arson fire, shooting gunshots at the Armenian school and defacing it with threatening, anti-Armenian graffiti.

It is very clear that these current events were enabled by a century of genocide denial. Hitler’s rousing speech to his generals before their march into Poland is perhaps the most concise warning of the dangers of denial: “After all, who today remembers the annihilation of the Armenians?”

Happily, the U.S. will no longer take part. Biden just put an end to denial, with the strong backing of Congress, which overwhelmingly recognized the Armenian Genocide in 2019, with the principled leadership of Bay Area Congress members Nancy Pelosi, Anna Eshoo and Jackie Speier. The Turkish government swiftly reacted, summoning its ambassador home and reminding Biden of the genocide of the Native Americans. That “threat” made me feel a bit hopeful for the positive influence it might have on our own country.

As I’ve done every year for more than two decades, I stood atop Mt. Davidson for the commemoration this Saturday, but this time I took deep, long breaths of fresh air, of a kind I haven’t experienced for most of my life. I watched the 6-year-old Cub Scouts march to the cross with wreaths, heard a middle school student sing the Armenian song, “I Wish,” and heard the public officials, like the San Francisco Supervisor Aaron Peksin, lend their support.

Peskin, a descendant of Holocaust survivors, has introduced a resolution every year for 14 years, calling on the U.S. president to recognize the Armenian Genocide. Peskin joked that he knew it probably wasn’t his resolution that caused Biden’s statement.

I knew he was wrong: It was the individual and collective demands of Americans of every imaginable background, over the course of a century, asking that this truth be preserved, protected and pronounced. And they must all take credit alongside Biden himself for the new day he has ushered in.

This new day will bring with it more work to expand educational efforts here in the U.S. and to urge the people of Turkey to demand the truth from their government, so they might come to terms with their own history and seek a path to redemption, reconciliation and peace with Armenia.

But, all this future work was not on my mind as I stood on the hilltop catching my breath. All I wanted to do was take a blissful victory roll down that hill.