Macron Again Calls on Baku to Pull Out of Armenia 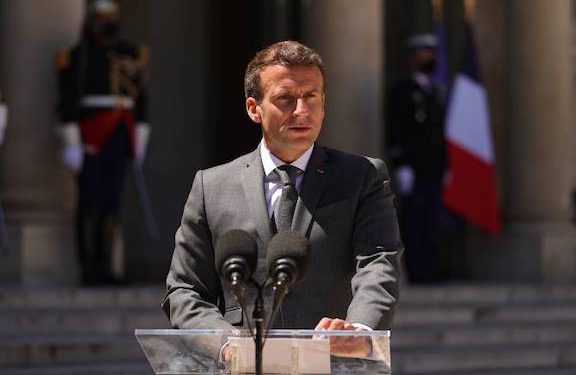 “The Azerbaijani forces should withdraw from the sovereign territory of Armenia and I call on the sides to return to their initial positions,” President Emmanuel Macron of France said, after welcoming Armenia’s Acting Prime Minister Nikol Pashinyan to Paris on Tuesday.

Pashinyan is in Paris, and will travel to Brussels later this week, to discuss with European allies the current border standoff, which started on May 12 when Azerbaijani forces breached Armenia’s sovereign border and advance to positions in Gegharkunik and Syunik provinces in Armenia proper. Last week Azerbaijani forces shot and killed and Armenian soldiers and, on Thursday, captured six Armenian soldiers in the Gegharkunik Province.

“France stands with Armenia,” Macron said. “In this difficult period France is determined to bring peace to the region.”

Armenia is facing a security crisis, and France is determined that peace be established in the region, Macron said, adding that “a lot still needs to be done,” despite the sides observing the fragile ceasefire reached via the November 9 agreement.

The French leader expressed readiness to support Armenia in its current predicament, saying that first and foremost Azerbaijan must return all prisoners of war and captives. He also reflected on the ongoing campaign to destroy Armenian cultural and religious sites.

“The preservation of heritage in Nagorno Karabakh and adjacent territories is also an important issue. Both the Christian and the Muslim heritage must be definitely preserved. As a Co-Chair of the OSCE Minsk Group, it’s the duty of France to do everything so that the sides reach de-escalation and establish dialogue,” added Macron before heading into a one-on-one meeting with Pashinyan.

“We have also provided exceptional assistance to the activities of the International Committee of the Red Cross engaged in supporting the war prisoners kept in Azerbaijan and their families, as well as the search operations of those missing in action,” explained Macron.

Pashinyan thanked Macron for his and France’s leadership in this and crises that have impacted Armenia in the past year.

Macron became the first world leader to call on Azerbaijan to withdraw its troops from Armenia a day after Azerbaijani forces breached the borders.

Pashinyan also praised France’s role as a co-chairing country of the OSCE Minks Group, saying mediation efforts by the co-chairs are important to arrive at a lasting peace in the region.

Upon his arrival in Paris, Pashinyan was met with angry protesters who had gathered in support of the Armenian Revolutionary Federation.

Aivazyan Explains Resignation While Other Ministry Officials Step Down