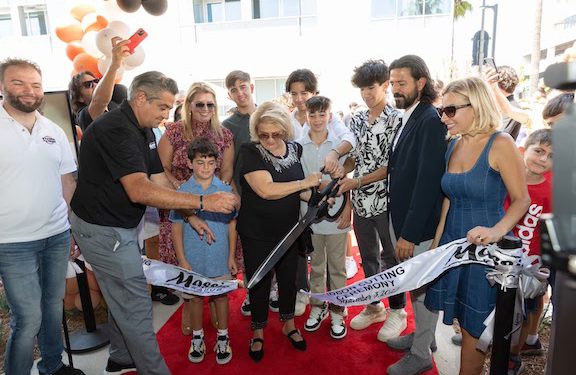 Well known for their six existing greater Los Angeles in-mall outposts, the free-standing restaurant is the first of its kind for Massis Kabob and is positioned at the corner of Colorado Boulevard and Glendale Avenue.

Nearly 400 guests were in attendance, including Mayor of Glendale, Ardashes “Ardy” Kassakhian, who provided a proclamation, and California State Senator, Anthony Portantino, among many other esteemed local dignitaries. Certificates of commendation were provided by Assemblymember Laura Friedman and Counsel General of Armenia Ambassador, Armen Baibourtian.

After a ribbon cutting ceremony facilitated by the Glendale Chamber of Commerce, the festivities paid homage to the multicultural ethnic mix of Glendale and Los Angeles, offering live music performances from legendary Armenian singer, Harout Pamboukjian and a mariachi band, as well as delicacies such as churro sundaes and traditional Armenian coffee made using hot sand. Guests enjoyed the full Massis Kabob food menu available for purchase and savored traditional Mid-Eastern cuisine in the beautiful new 3,500 square feet location.

“Despite scorching triple-digit temperatures, we couldn’t have it any other way than to throw a huge celebration in honor of the incredible Glendale community that has supported us since the beginning and our father, who would have been so proud of this new location,” said Gevik Baghdassarian, who along with his brother Peter, took over the business after their father’s passing in 2017.

The flagship location honors the realization of late founder Hacop “Jack” Baghdassarian’s dream to bring Armenian and Persian-influenced cuisine to the forefront of California culture. Baghdassarian founded Massis Kabob 46 years ago at the Glendale Galleria, a site that continues to flourish and operate today. Massis Kabob specializes in serving delicious Mediterranean and Middle-Eastern cuisine with expert preparation and value using solely fresh ingredients.

“We look forward to the next 46 years of success in sharing our Armenian culture through our freshly made cuisine, while adapting our dining space to a stunning modern format to usher in a new chapter,” said Peter Baghdassarian.

The new location encompasses 150 seats in the indoor dining area and outdoor patio. The kitchen, the largest of all Massis Kabob locations, features over 20 feet of open-fire barbecue grilling, allowing the business to feed its many in-store patrons while fulfilling their proliferating pickup and delivery business.

Join the Kabobery® Klub by ordering takeout and delivery through Massis Kabob’s convenient mobile app available in the Apple Store and Google Play. Download the app to receive one complimentary side of choice with your first order, and start earning points and rewards while you eat. For more information about Massis Kabob and to stay updated on the new Glendale location opening, visit Massis Kabob’s website and follow Massis Kabob on Instagram.

Founded by Hacop “Jack” Baghdassarian in 1976, Massis Kabob has a devoted following with seven locations in the Los Angeles area. Massis Kabob prides itself on serving delicious Mediterranean and Middle-Eastern cuisine with expert preparation and value for the dollar using only the freshest and finest ingredients the world has to offer. Dubbed “The Original Kabobery ®, Massis Kabob celebrates over 45 years of grilling perfection.