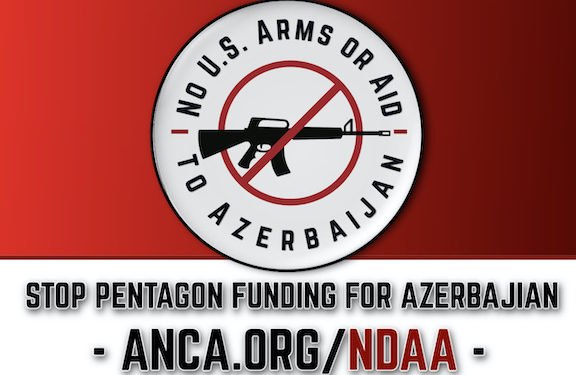 “We thank Representatives Speier, Pallone, and Sherman for giving their Congressional colleagues the long-overdue opportunity for an up-or-down vote on zeroing out any and all U.S. military aid to oil-rich Azerbaijan,” said Aram Hamparian, Executive Director of the ANCA. “In the wake of Azerbaijan’s ethnic cleansing last year of 100,000+ indigenous Armenians from Artsakh – amid Aliyev’s ongoing invasion and occupation of Armenian territory – the Congress must act in a bipartisan manner to hold Azerbaijan accountable for its violent anti-Armenian aggression.”

The amendment offered by Congressman Sherman (D-CA), a senior member of the Foreign Affairs Committee, states that: “No Federal funds may be made available to provide any United States military or security assistance or cooperation to the defense or security forces of the Government of Azerbaijan.”

The amendment filed by Rep. Pallone, the founding Co-Chair of the Armenian Caucus, specifically addresses the largest stream of U.S. military aid to Azerbaijan – Section 333 assistance: “None of the funds authorized to be appropriated by this Act or otherwise made available for the Department of Defense for fiscal year 2022 to carry out the authority of section 333 of title 10, United States Code, be made available for assistance for Azerbaijan.”

The measure introduced by Rep. Jackie Speier (D-CA), a highly respected member of the Armed Services Committee, reads: “None of the amounts authorized to be appropriated by this Act or otherwise made available to the Department of Defense may be made available to provide any United States military or security assistance or cooperation to the defense or security forces of the Government of Azerbaijan.”

Additional amendments are expected to be filed prior to tomorrow’s deadline.

On September 20th, the House Rules Committee will be meeting to decide which amendments will be considered “in order,” paving the way for full U.S. House consideration later that week.  The ANCA is mounting a nationwide campaign to encourage U.S. Representatives to cosponsor pro-Artsakh/Armenia amendments.  Amendments with strong, bipartisan backing are generally considered more favorably by Rules Committee members.

The full text of the ANCA’s legislative briefing on NDAA amendments cutting U.S. military aid to Azerbaijan is provided below.

Legislative Request: Stop U.S. arms and aid to oil-rich Azerbaijan.
The full U.S. House – following up on passage this July of the Pallone Amendment to the FY22 foreign aid bill, prohibiting International Military Education and Training (IMET) and Foreign Military Financing (FMF) aid to Azerbaijan – should amend the FY22 National Defense Authorization Act to zero-out all Section 333 (Capacity Building) and other military assistance to the Aliyev regime.

As a candidate, President Biden called on the United States to enforce Section 907 of the FREEDOM SUPPORT ACT and “stop the flow of military equipment to Azerbaijan.”

This law, as originally enacted in 1992 with strong bipartisan support, restricts U.S. assistance to the Government of Azerbaijan until the President determines, and so reports to the Congress, that the Government of Azerbaijan is taking demonstrable steps to cease all blockades and other offensive uses of force against Armenia and Nagorno-Karabakh. It has been waived – under expanded authority granted by Congress in 2001 – during the Bush, Obama, Trump, and Biden Administrations.