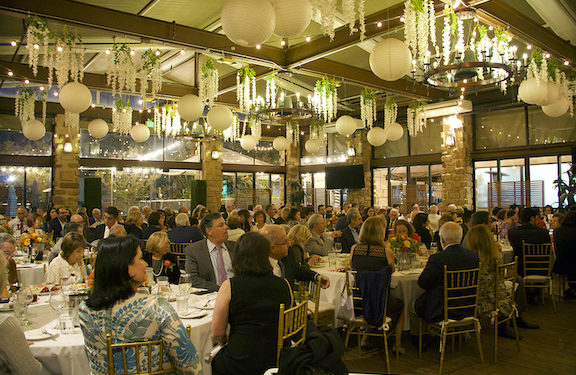 Phoenicia restaurant’s banquet hall in Glendale was filled to capacity on Sunday, October 2, where friends and supporters of C & E Merdinian Armenian Evangelical School gathered for a dinner celebrating the 40th Anniversary of the School, to appreciate Dr. Vahe Nalbandian’s 15 Years of dedicated service to the School as Chairman and Treasurer of the Board, and the 25th Anniversary of the Merdinian Women’s Auxiliary to honor all the women who have served on the Auxiliary Board with love and devotion over the past 25 years.

After the National Anthems were sung by vocalists Ani Marderosian and Arshag Choukourian, Rev. Harut Khachatryan, Senior Pastor of the United Armenian Congregational Church of Los Angeles, offered remarks, on behalf of the Church, and the Invocation.

“The United Armenian Congregational Church, from the days of the School in its Sunday School classrooms to today’s vital School facility, stands firm in its commitment to the growth and success of Merdinian School,” said Rev. Khachatryan.

George Phillips Jr. Esq., Vice Chair of Merdinian School Board, offered remarks on behalf of the Board and introduced Dr. Souzy Ohanian, the newly appointed Principal of the School.

9. Elizabeth Agbabian the visionary and the founding member of Merdinian School Women’s Auxiliary

Merdinian School has been very dear to the Phillips family. George Phillips Sr. Esq., who formed the legal entity, was one of the founders of the School, and was involved in its initial funding and purchase of the adjoining property. His mother Suzie Phillips and his wife Dina have been involved in the School’s Women’s Auxiliary since the beginning, and Dina was the Auxiliary’s founding member and Chair. Phillips Jr. served on the School Board 25 years ago as well.

“The School is an institution we have always supported, as we believe very strongly that an early education, grounded in Christian and Armenian instruction, is a key to shaping our community’s future,” said Phillips.

Principal Ohanian greeted the guests and gave a brief update on the current and future projects of the School. “I would like to take a moment to express my immense gratitude for the hard work and incredible dedication to Merdinian and the world of education that current and past teachers have contributed and continue to contribute,” she said.

“Merdinian’s story would not be possible without these incredible teachers, faculty, and staff – many of whom are here today. They are the most important members of the School. They give our children purpose, set them up for success as citizens of our world, and inspire in them a drive to do well and succeed in life,” added Dr. Ohanian.

Following the recitation of Vahan Tekeyan’s poem, “Partsratsum/Climbing,” by a Merdinian Alumna Natelle Ezadjian, AMAA Executive Director/CEO Zaven Khanjian offered remarks on behalf of the Armenian Missionary Association of America and recognized the dedicated service of Honoree Dr. Vahe Nalbandian, Ph.D. to Merdinian School for the past 15 years in his capacity as the Chair and the Treasurer of the Board (appointed by the AMAA).

“Dr. Nalbandian carries a profound record of service that moved the School forward in leaps and bounds throughout his years of service,” said Khanjian. “He tirelessly and diligently led the School Board and managed its finances. His sacrificial service to the School and its adorable children is the optimum example of following the footsteps of our Lord, Jesus Christ on earth.”

Khanjian was involved in the founding of Merdinian School in 1982. He was also directly involved in the founding of the Merdinian Women’s Auxiliary walking parallel the path of service and devotion of all Auxiliary members over the years. He commended the women who served on the Board of the Women’s Auxiliary with love and devotion over the past 25 years. “Their material and spiritual contribution to the School and its children is invaluable,” said Khanjian.

Assemblymember Adrin Nazarian of California’s 46th Assembly District presented a special Resolution to Dr. Nalbandian and thanked him for his unique and invaluable service to the School as the Chair and Treasurer of its Board over the past 15 years.

Dr. Nalbandian thanked the guests for honoring him by their presence. He highlighted the School’s important accomplishments during the past fifteen years, including major infrastructure improvements, such as construction of the Bezjian Family Building, and adoption of state-of-the-art technologies that enhanced the students’ learning experience.

When the School closed its doors to in-person instruction in early 2020 due the pandemic, these technologies proved crucial to the School’s successful transition to distance learning smoothly and in record time. Dr. Nalbandian thanked organizations and individuals whose generous financial support made these improvements possible.

Dr. Nalbandian also recognized individuals who offered their labors and expertise to assist the school in carrying out various infrastructure and technology initiatives. He ended his speech by thanking the Women’s Auxiliary for organizing this event in appreciation of his service to the School.

Agbabian briefly spoke about her vision and initiation of the Women’s Auxiliary with then Principal Dr. Vahram Shemmassian, and Rev. Dr. Movses Janbazian, Executive Director of AMAA at the time, and expressed thanks for the tribute.

The Merdinian Women’s Auxiliary was formed in May 1997 as an affiliate of AMAA. The first meeting of the newly formed Auxiliary Board was held at the home of Suzie Phillips in the presence of the late Rev. Janbazian, the Executive Director of the AMAA.

The event was organized by the Merdinian Women’s Auxiliary, Co-Chaired by Ani Hanessian and Louisa Janbazian, and was emceed by Shogher Shanoian, an alumna, parent, and staff member of the School serving as its Administrative and Admissions Coordinator. The proceeds from the event will benefit the Merdinian School Scholarship Fund.

We praise God for the past 40 years of Merdinian School and ask for God’s guidance in this 41st academic year and all the years to come.